Items related to Nuclear Politics in America: A History and Theory of... 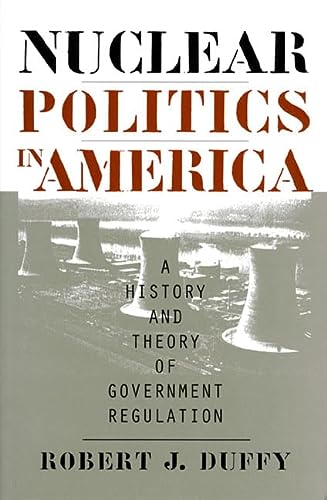 Nuclear Politics in America: A History and Theory of Government Regulation (Studies in Government & Public Policy)

Examining the politics of nuclear power over the last 50 years, this study relates broad trends in American politics to changes in the regulation of the nuclear industry to show how federal policies in this area have been made, implemented and altered. Series: Studies in Government and Public Policy. Num Pages: 336 pages. BIC Classification: 1KBB; 3JJP; JPA; JPQB; KNBN; RNQ. Category: (P) Professional & Vocational; (UP) Postgraduate, Research & Scholarly; (UU) Undergraduate. Dimension: 229 x 152 x 24. Weight in Grams: 463. . 1997. Paperback. . . . . Books ship from the US and Ireland. Bookseller Inventory # V9780700608539

Title: Nuclear Politics in America: A History and ...

The promise and peril of nuclear power have been a preoccupation of the modern age. Though the nuclear industry has witnessed periods of expansion and retrenchment, there are now more than one hundred nuclear reactors providing America with almost a quarter of its electrical power.

Robert Duffy now examines the politics of nuclear power over the last fifty years, relating broad trends in American politics to changes in the regulation of the nuclear industry to show how federal policies in this area have been made, implemented, and altered. He weaves a discussion of institutional change in all three branches of government into a study of agenda-setting, regulatory reform, and "subgovernment" politics, demonstrating how these forces combined to create policy change in this important area of public policy.

Duffy's work traces nuclear politics from the creation of a powerful subgovernment through the public lobby reforms of the late 1960s and early 1970s and the deregulatory backlash of the Reagan years. He demonstrates that while policies did change in the 1970s, they did not change as much as other accounts have suggested, and that the industry continued to receive considerable federal support. The book is particularly significant for extending the discussion of nuclear policy through the Bush and Clinton years, including the controversy over waste disposal, new licensing procedures enacted in the 1992 Amendments to the Atomic Energy Act, and the effects of deregulation of electric utilities.

By providing both a description of the transformation of this policy community and an analysis of how regulatory change occurs, Nuclear Politics in America offers a new and important view of policymaking in America.

"A well-written survey that effectively places the debate over nuclear power in the context of major changes in U.S. politics and society since World War II. I found Duffy's discussions of the demise of the Atomic Energy Commission and the Joint Committee on Atomic Energy particularly valuable."--J. Samuel Walker, author of Containing the Atom: Nuclear Regulation in a Changing Environment, 1963-1971

"A rich account of how an important regulatory policy changed during the 1970s. Among the many virtues of this book is its careful attention to the philosophical and institutional dimensions of the politics of nuclear power. Duffy describes critical developments in regulatory policy skillfully; more important, he sheds light on how ideas and institutional arrangements govern political reform in the United States."--Sidney M. Milkis, coauthor of The Politics of Regulatory Change

"A valuable study of the evolution of nuclear power as an issue area during the past four decades. Well-researched, nicely written, and firmly grounded in the theoretical literature, it is likely to be adopted for many courses on environmental politics, bureaucracy, and public policymaking generally."--Christopher J. Bosso, author of Pesticides and Politics

"Duffy does a tremendous job of weaving the analytical and descriptive material. A masterly addition to the literature on policymaking, agenda-setting, and political change in America."--Frank Baumgartner, author of Agendas and Instability in American Politics