Items related to ORIGINS OF THE WAR WITH MEXICO: The Polk-Stockton Intrigue 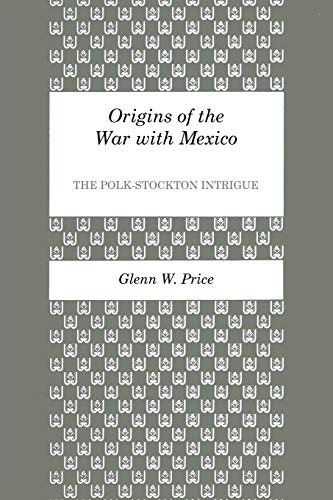 ORIGINS OF THE WAR WITH MEXICO: The Polk-Stockton Intrigue

Title: ORIGINS OF THE WAR WITH MEXICO: The ...

In the spring of 1846 James K. Polk announced that the Mexican Army had invaded United States territory and had “shed American blood upon the American soil.” This political rhetoric, as Glenn W. Price establishes in Origins of the War with Mexico: The Polk-Stockton Intrigue, is part of the myth of American innocence. It represents the “internal contradiction between professed values and patterns of action,” perpetuated by American historical writing that emphasizes national consequences of the acquisition of foreign territory and minimizes both its international significance and the importance of the diplomatic and military methods used.

A conflict with Mexico, leading to territorial expansion of the United States, was not unwanted. California was Polk’s prime objective from the beginning of his administration, and this Mexican province was to be acquired by conquest in a war initiated on the Texas-Mexican border. To this end Polk sent several agents to Texas, but the man at the center of the war intrigue was Commodore Robert F. Stockton, independently wealthy, prominent in politics, and the head of great business enterprises.

Sufficient evidence exists to substantiate in every important particular the steps in Polk’s path of intrigue: his attempts to bribe Mexican officials; his efforts to encourage revolutionary forces in the Mexican provinces; his use of the threat of force to frighten Mexico into selling California; his attempt to initiate a war by proxy through the government of Texas and Anson Jones.

If Polk was unwilling to assume responsibility for aggressive war, Stockton was not; he arrived in Galveston with a squadron of naval vessels in May of 1845, prepared to finance an army of three thousand men from his personal funds to avoid the overt involvement of the government of the United States. But, says Price, for all the internationally dangerous implications of such a maneuver, the two men who played the chief roles in the war intrigue of 1845 are representative in their written and spoken expression of faith in American righteousness of action and in the American tradition of the divine mission.

Based on extensive research into the written and spoken words of the people who were involved, directly and indirectly, in the events, this analysis (which will be considered revisionist) of the origins of the War with Mexico is the result of the kind of objective approach to national history for which the author makes a plea in his preface and conclusion and in his interpretive comments throughout the work. The historian, Price believes, “has the extraordinary advantage of being able to examine mankind from that distance and elevation and detachment which so often reveals, as it is designed to reveal, the gulf between pretension and performance.”

General Eclectica - a wide variety of subjects, authors and titles - rare, scarce, out-of-print, and just plain used items - from the mundane to the sublime