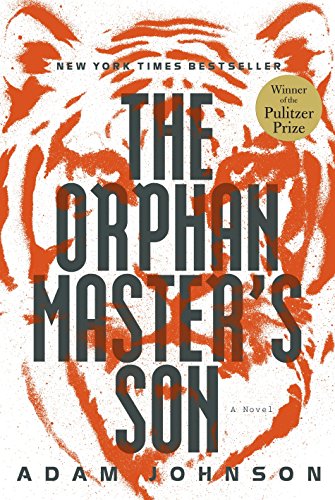 Author previously of a story collection, EMPORIUM, and PARASITES LIKE US, a novel. Johnson's latest collection of stories, FORTUNE SMILES, is the 2015 winner of the National Book Award for Fiction. THE ORPHAN MASTER'S SON, his second novel, is the 2013 Winner of the Pulitzer Prize for Fiction. As new, in as new, mylar-protected dust jacket. L151. Bookseller Inventory # 021800

The Pulitzer Prize–winning, New York Times betselling novel of North Korea: an epic journey into the heart of the world’s most mysterious dictatorship.

“Imagine Charles Dickens paying a visit to Pyongyang, and you see the canvas on which [Adam] Johnson is painting here.”—The Washington Post

Pak Jun Do is the haunted son of a lost mother—a singer “stolen” to Pyongyang—and an influential father who runs a work camp for orphans. Superiors in the North Korean state soon recognize the boy’s loyalty and keen instincts. Considering himself “a humble citizen of the greatest nation in the world,” Jun Do rises in the ranks. He becomes a professional kidnapper who must navigate the shifting rules, arbitrary violence, and baffling demands of his overlords in order to stay alive. Driven to the absolute limit of what any human being could endure, he boldly takes on the treacherous role of rival to Kim Jong Il in an attempt to save the woman he loves, Sun Moon, a legendary actress “so pure, she didn’t know what starving people looked like.”

Named ONE OF THE BEST BOOKS OF THE YEAR by more than a dozen publications, including The Washington Post · Entertainment Weekly · The Wall Street Journal · Los Angeles Times · San Francisco Chronicle

Praise for The Orphan Master’s Son

“An exquisitely crafted novel that carries the reader on an adventuresome journey into the depths of totalitarian North Korea and into the most intimate spaces of the human heart.”—Pulitzer Prize citation

“Mr. Johnson has written a daring and remarkable novel, a novel that not only opens a frightening window on the mysterious kingdom of North Korea, but one that also excavates the very meaning of love and sacrifice.”—Michiko Kakutani, The New York Times

“Rich with a sense of discovery . . . The Orphan Master’s Son has an early lead on novel of [the year].”—The Daily Beast

“This is a novel worth getting excited about.”—The Washington Post

“[A] ripping piece of fiction that is also an astute commentary on the nature of freedom, sacrifice, and glory.”—Elle

An Amazon Best Book of the Month, January 2012: It is only January, but Adam Johnson’s astonishing novel is destined to cast a long shadow over the year in books. Jun Do is The Orphan Master’s Son, a North Korean citizen with a rough past who is working as a government-sanctioned kidnapper when we first meet him. He is hardly a sympathetic character, but sympathy is not author Johnson’s aim. In a totalitarian nation of random violence and bewildering caprice—a poor, gray place that nonetheless refers to itself as “the most glorious nation on earth”—an unnatural tension exists between a citizen’s national identity and his private life. Through Jun Do’s story we realize that beneath the weight of oppression and lies beats a heart not much different from our own—one that thirsts for love, acceptance, and hope—and that realization is at the heart of this shockingly believable, immersive, and thrilling novel. --Chris Schluep

When I arrived at Pyongyang's Sunan Airport a few years ago, my head was still spinning from a landing on a runway lined with cattle, electric fences and the fuselages of other jets whose landings hadn't gone so well. Even though I'd spent three years writing and researching The Orphan Master's Son, I was unprepared for what I was about to encounter in “the most glorious nation in the world.”

I'd started writing about North Korea because of a fascination with propaganda and the way it prescribes an official narrative to an entire people. In Pyongyang, that narrative begins with the founding of a glorious nation under the fatherly guidance of Kim Il Sung, is followed by years of industry and sacrifice among its citizenry, so that when Kim Jong Il comes to power, all is strength, happiness and prosperity. It didn't matter that the story was a complete fiction--every citizen was forced to become a character whose motivations, desires and fears were dictated by this script. The labor camps were filled with those who hadn't played their parts, who'd spoken of deprivation instead of plenitude and the purest democracy.

When I visited places like Pyongyang, Kaesong City, Panmunjom and Myohyangsan, I understood that a genuine interaction with a North Korean citizen was unlikely, since contact with foreigners was illegal. As I walked the streets, not one person would risk a glance, a smile, even a pause in their daily routine. In the Puhung Metro Station, I wondered what happened to personal desires when they came into conflict with a national story. Was it possible to retain a personal identity in such conditions, and under what circumstances would a person reveal his or her true nature? These mysteries--of subsumed selves, of hidden lives, of rewritten longings--are the fuel of novels, and I felt a powerful desire to help reveal what a dynastic dictatorship had forced these people to conceal.

Of course, I could only speculate on those lives, filling the voids with research and imagination. Back home, I continued to read books and seek out personal accounts. Testimonies of gulag survivors like Kang Chol Hwan proved invaluable. But I found that most scholarship on the DPRK was dedicated to military, political and economic theory. Fewer were the books that focused directly on the people who daily endured such circumstances. Rarer were the narratives that tallied the personal cost of hidden emotions, abandoned relationships, forgotten identities. These stories I felt a personal duty to tell. Traveling to North Korea filled me with a sense that every person there, from the lowliest laborer to military leaders, had to surrender a rich private life in order to enact one pre-written by the Party. To capture this on the page, I created characters across all levels of society, from the orphan soldier to the Party leaders. And since Kim Jong Il had written the script for all of North Korea, my novel didn't make sense without writing his role as well.