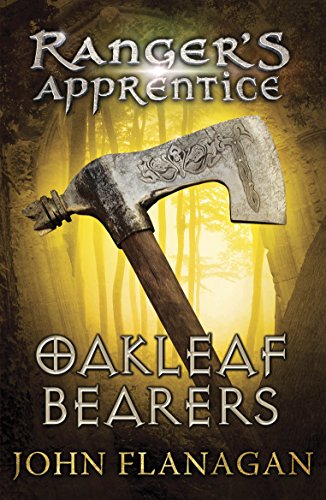 Language: English. Brand new Book. Oakleaf Bearers is the fourth thrilling book in John Flanagan's Ranger's Apprentice series - over eight million sold worldwide.Evanlyn has been taken captive by a mysterious horseman. Will's attempts to rescue her lead him into the territory of a fearsome new enemy. Now, he must unite with old rivals to vanquish this greater threat. But can the fragile truce survive the battle?Perfect for fans of J.R.R. Tolkien's Lord of the Rings, T.H. White's The Sword in the Stone, Christopher Paolini's Eragon series and Rick Riordan's Percy Jackson series. Bookseller Inventory # AAZ9780440867418

The international bestselling series with over 5 million copies sold in the U.S. alone!

Still far from their homeland after escaping slavery in the icebound land of Skandia, Will and Evanlyn's plans to return to Araluen are spoiled when Evanlyn is taken captive by a Temujai warrior. Though still weakened by the warmweed's toxic effects, Will employs his Ranger training to locate his friend, but an enemy scouting party has him fatally outnumbered. Will is certain death is close at hand, until Halt and Horace make a daring, last-minute rescue. The reunion is cut short, however, when Halt makes a horrifying discovery: Skandia's borders have been breached by the entire Temujai army. And Araluen is next in their sights. If two kingdoms are to be saved, an unlikely union must be made. Will it hold long enough to vanquish a ruthless new enemy? Or will past tensions spell doom for all?

The battles and drama are nonstop in Book Four of this hugely popular epic.

Perfect for fans of J.R.R. Tolkien’s Lord of the Rings, T.H. White’s The Sword in the Stone, Christopher Paolini’s Eragon series, and George R. R. Martin’s Game of Thrones/A Song of Ice and Fire series.

John Flanagan grew up in Sydney, Australia, hoping to be a writer. John began writing Ranger’s Apprentice for his son, Michael, ten years ago, and is still hard at work on the series and its spinoff, Brotherband Chronicles. He currently lives in the suburb of Manly, Australia, with his wife. In addition to their son, they have two grown daughters and four grandsons.

Book Depository is an international bookseller. We ship our books to over 100 countries around the globe and we are always looking to add more countries to the list. We really, really love books and offer millions of titles, currently over 10 million of them, with this figure increasing daily. Living by our motto, 'Bookseller to the World', we focus on offering as many titles as possible to as many customers as possible. Most of our titles are dispatched within 2 business days of your order. Apart from publishers, distributors and wholesalers, we even list and supply books from other retailers! We hope you enjoy our selection and discover your new favourite book.


All books are shipped in New condition promptly, we are happy to accept returns up to 30 days from purchase. Orders usually ship within 1-2 business days. Domestic Shipments are sent by Royal Mail, and International by Priority Airmail. Please contact the seller directly if you wish to return an order. Name of business : The Book Depository Ltd Form of legal entity : A Limited Company Business address: The Book Depository, 60 Holborn Viaduct, London, EC1A 2FD, United Kingdom Email address: abebo...


Orders usually ship within 1-2 business days. Domestic Shipments are sent by Royal Mail, and International by Priority Airmail. We are happy to accept returns upto 30 days from purchase. Please contact the seller directly if you wish to return an order