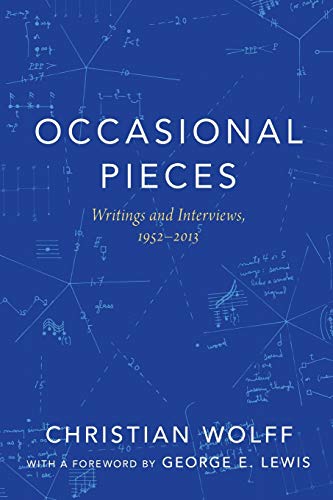 As one of the original pioneering composers of the American experimental music movement and a well known scholar of classics, Christian Wolff has long been active as a significant thinker and elegant writer on music. With Occasional Pieces, Wolff brings together a collection of his most notable writings and interviews from 1950 to the present, shining a new light on American music of the second half of the twentieth century. The collection opens with some of his earliest writings on his craft, discussing his own proto-minimalist compositional procedures and the music and ideas that led him to develop these techniques. Organized chronologically to give a sense of the development of Wolff's thinking on music over the course of his career, some of the pieces delve into connections of music-making to social and political issues, and the concept of indeterminacy as it applies to performance, while others offer insights into the work of Wolff's notable contemporaries including John Cage, Morton Feldman, Earle Brown, David Tudor, Frederic Rzewski, Cornelius Cardew , Dieter Schnebel, Pauline Oliveros, and Merce Cunningham. An invaluable resource for historians, composers, listeners and students alike, Occasional Pieces offers a deep dive into Christian Wolff's musical world and brings new light to the history of the American experimental movement.

Christian Wolff is a former Professor of Classics and Music at Dartmouth College, now a full-time composer and sometime performer. Born in Nice, France, he has lived and worked primarily in the United States since 1941, where he studied composition briefly with John Cage in 1950. He was a pioneering member of the "New York School" of composition in the 1950's and 60's and with Cage, Morton Feldman, Earle Brown and David Tudor produced a range of experimental music that maintains a notable and still evolving presence. Wolff has received awards and grants from the American Academy and National Institute of Arts and Letters, the Ford Foundation, DAAD Berlin, the Asian Cultural Council, the Fromm Foundation, the Foundation for Contemporary Performance Arts and the Mellon Foundation, and is a member of the Akademie der Kuenste in Berlin and the American Academy of Arts and Sciences.