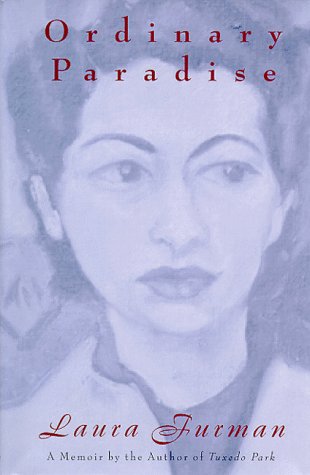 Synopsis: Ordinary Paradise offers the moving story of a young girl's reaction to the early loss of her mother with its persisting consequences, as they affect choices the author has made with regard to her own family and future.

Laura Furman was thirteen-and-a-half years old at the time her mother died, swiftly and without explanation, from ovarian cancer, thus creating a rupture in the landscape of what had been a happy childhood that the author equates with the Great Rift Valley of Africa. In a family where no one spoke about anything messy or uncomfortable, the result was a repression of mourning to the point where the author felt that her own mother's existence was being obliterated: "Now it was as if she'd never existed—and if she hadn't existed, then I did not."

The difficulties that ensue, like the earlier description of happier times when Laura's mother was alive, are expressed in the clean, precise, supple style that has distinguished Furman's previous books. The book is not bitter; rather, this is a voyage of attempted understanding—honest and realistic in its depiction of the self-absorption of the surrounding adult world; heartbreaking in detail, but ultimately victorious as its heroine strives to possess the experience wholly for the first time, as a mother and wife. It is a powerful rendering of the effect upon the soul of an artist of the silences that often characterize a family's reaction to crisis.

Giving the memoir a contemporary focal point is the controversial decision made by the author in response to the statistical probability that she would follow her mother and grandmother into an early death. "No one spoke to me about the hereditary possibility of ovarian cancer but the bond I felt with my mother linked me with her disease. . . . Inside my abdomen (waited) patient black space that was not me and would be the end of me." This decision addresses issues of a woman's identity in a poignant fashion that the reader will never forget.

From the Publisher: "ORDINARY PARADISE shows how a devastating loss, acknowledged or not, can seep through the family psyche. Furman, whose novels include TUXEDO PARK, writes a dreamy, imagistic prose. By turns emotionally muted and fiercely angry, she is forthright about the possible distortions of memory".(H)onesty and heroic appeal."--Andrea Cooper, The New York Times Book Review"

Unlike many recent self-serving and self-loving memoirs, this account feels like an honest attempt to understand and ease an ancient pain. It is a privilege to be allowed to accompany the author on the journey."--The Boston Globe

"In her graceful, compelling memoir, ORDINARY PARADISE, Furman details an adolescence full of grief and devoid of guidance from her father and new stepmother, and the moving process of healing the wounds of her youth".Her decision to take drastic measures to avoid her mother's fate is a stark illustration of the enduring strength of maternal love."--SELF Magazine, November, 1998

"Her indignation still burns (as does the reader's) toward those who wounded her, but she takes care to treat them tactfully and judiciously. This memoir is the purified product of much reflection, much internal struggle".Furman's memory is a beautifully tuned instrument. Writing about her family's summer house in rural New Jersey, she reconstructs an innocent, imaginative childhood, sheltered and free, of a kind that hardly exists anymore."--The Houston Chronicle"

Furman describes with excruciating sensitivity what happens when families refuse to acknowledge ordinary grief. Because this posture within families is all too common, Furman's memoir resonates beyond her personal experience and touches a familiar chord.(H)er ability to accomplish her own mental healing is a triumph."--Austin American-Statesman

"Laura Furman is best known for her fiction in (which) she limns the territory of relationships in all their complexities, frustrations and fulfillments. But Furman deserves a wider audience for her newest book, "Ordinary Paradise." In this haunting, highly personal book, Furman tells the story of an unusually rich and happy childhood, but she also addresses a health issue significant in many women's lives and the lives of those who love them: the threat of cancer and how we react to it. "Furman's story becomes a sort of piecing together of the puzzle, of trying to reconstruct her mother from distant memories. It is those memories, and her own experience of becoming a wife and mother, that bring Furman to her defining moment. Will she wait, as her mother did, for the diagnosis of a familial disease that has a 1-in-2 chance of killing her as it did her grandmother and mother? Or will she act to ensure a future for herself that was denied these two women?"---Judyth Rigler, San Antonio Express-News

"Laura Furman's deeply felt memoir of her childhood begins in light, moves through darkness and ends in a light strengthened by shadows. She describes her childhood in New York and New Jersey in telling detail (the image of apartment houses as drawers stuffed with lives is especially vivid) and does not ignore the instability that led her to destructive behavior, therapy and hospitalization after her mother's death. Minnie Furman is the center of the book, just as she was the centerpiece of family members' lives, and her daughter's portrayal of the ways her death affected them is heart-wrenching.---Dallas Morning News

"Ordinary Paradise will be provocative reading for many women and Laura Furman has bravely raised an issue that should be much on our minds."--Ft. Worth Star-Telegram

Book Description Winedale Publishing. Hardcover. Condition: Very Good. A copy that has been read, but remains in excellent condition. Pages are intact and are not marred by notes or highlighting, but may contain a neat previous owner name. The spine remains undamaged. At ThriftBooks, our motto is: Read More, Spend Less. Seller Inventory # G0965746844I4N00

Book Description Winedale Publishing, 1998. Condition: Good. A+ Customer service! Satisfaction Guaranteed! Book is in Used-Good condition. Pages and cover are clean and intact. Used items may not include supplementary materials such as CDs or access codes. May show signs of minor shelf wear and contain limited notes and highlighting. Seller Inventory # 0965746844-2-4

Book Description Winedale Publishing, 1998. Hardcover. Condition: Good. Signed. Connecting readers with great books since 1972. Used books may not include companion materials, some shelf wear, may contain highlighting/notes, may not include cdrom or access codes. Customer service is our top priority!. Seller Inventory # S_263394233