Items related to Oscar Wilde and the Poetics of Ambiguity 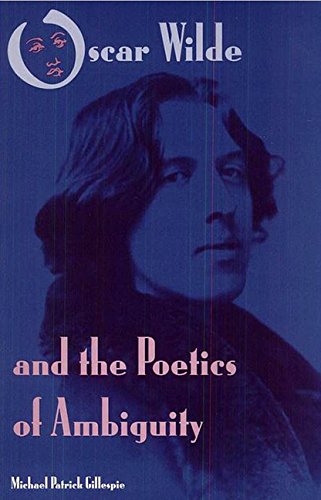 Oscar Wilde and the Poetics of Ambiguity

Title: Oscar Wilde and the Poetics of Ambiguity

"Balanced, clear, and judicious . . . [it] examines all of Wilde's oeuvre, from essays through novel, plays, and last works; and it does so, notably, by examining Wilde and his era in generous scope. . . . This book has authority and thoroughness."--Roy Gottfried, Vanderbilt University

Oscar Wilde and the Poetics of Ambiguity presents an inclusive approach to Wilde criticism. It highlights the diversity in Wilde's writing, suggests strategies for reading, and leaves the reader to decide how best to apply them.

In the first critical approach to Wilde's entire canon based on reader-response theory, Michael Patrick Gillespie examines the historical and social contexts in which the works are received. He synthesizes over a century of criticism, highlighting specific elements while ignoring others.

Citing multiplicity as the defining feature of Wilde's artistic consciousness, Gillespie maintains that any other approach gives short shrift to central aspects of Wilde's aesthetics.

In his preface to The Picture of Dorian Gray, Wilde wrote, "There is no such thing as a moral or an immoral book. Books are well written, or badly written." He then adds, disingenuously, "that is all."  Gillespie identifies the diverse features that make Wilde's works well written.

Michael Patrick Gillespie is professor of English at Marquette University, Milwaukee, and author of The Picture of Dorian Gray: "As the World Sees Me" and (with A. Nicholar Fargnoli) James Joyce A to Z.