Home Igor Cassini I'd Do It Over Again 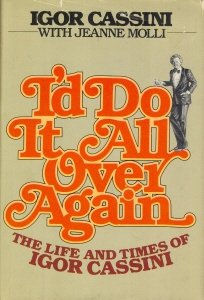 I'd Do It Over Again

Synopsis: Born as Igor Cassini Loiewski, he also worked as a publicist, ran the Celebrity Register, edited a short-lived magazine called Status, was a co-director of the fashion company House of Cassini, founded by his elder brother, Oleg Cassini, and was a television personality in the 1950s and 1960s. Cassini's height of influence was in the 1950s, when the Hearst chain claimed 20,000,000 readership for papers that carried his column. He coined the term "Jet set" to described the global movements of what had been "cafe society" ? those who entertained at restaurants and night clubs and hobnobbed with the stars of the entertainment industry. His pen name evoked the fictional quintessential New Yorker, "Diedrich Knickerbocker", who was created by Washington Irving. The term "cafe society" had been invented by Maury Paul, Cassini's predecessor as "Cholly Knickerbocker" at the New York Journal American. Later in his career, Igor, who was known as "Ghighi", hired a young assistant from Texas named Liz Smith. He also was the host of The Igor Cassini Show, an interview program that aired on the DuMont Television Network from October 25, 1953 to February 28, 1954, as well as another television program, Igor Cassini's Million Dollar Showcase. His autobiography, co-written with Jeanne Molli, I'd Do It All Over Again: The Life and Times of Igor Cassini.

Book Description Penguin Adult HC/TR, 1977. Condition: Good. A+ Customer service! Satisfaction Guaranteed! Book is in Used-Good condition. Pages and cover are clean and intact. Used items may not include supplementary materials such as CDs or access codes. May show signs of minor shelf wear and contain limited notes and highlighting. Seller Inventory # 0399115536-2-4

6. I'D DO IT ALL OVER AGAIN THE LIFE AND TIMES OF IGOR CASSINI

Book Description G. P. Putnam`s Sons, New York * * * * *, 1977. Hardcover. Condition: Near Fine. Book: Near Fine/, 1977 (illustrator). Book: Near Fine/, $35.89 0399115536 I`d Do It All OVER AGAIN. * CASSINI, Igor; MOLLI. Jeanne G. P. Putnam`s Sons New York * * * * * 1977 UnStated 1sT Edition H/c. Maroon Cloth Spine With Title In Faint Polished Gold Letters, Hard Cover Book: Near Fine/, Slight Shelf, Edge And Corner Wear. 266 Numbered Pages, Clean And Tight To The Spine, Printed On 0ff~White Paper, In Fine/ Condition. D/j: None. This Item Will Be Sent Wrapped In Plastic, Taped Shut And In A = Corrugated Mailing B0X. = To Prevent Shipping Damage So That It Will Arrive In The Description Described Which Applies To This Item, = ONLY. = No Odors, No Writing, No Names, No Rippling, Not Stuck Together, No Book Plate, Not X~Library, No Other Marks. = Will Make It, An Excellent Addition To Your Own Personal Library Collection, Or As A Gift, For The Discriminating Reader / Collector. = WORLD WIDE SHIPPING, AVAILABLE *. Seller Inventory # 018623

Book Description Putnam Pub Group, 1977. Paperback. Condition: Good. All orders are dispatched the following working day from our UK warehouse. Established in 2004, we have over 500,000 books in stock. No quibble refund if not completely satisfied. Seller Inventory # mon0004165458