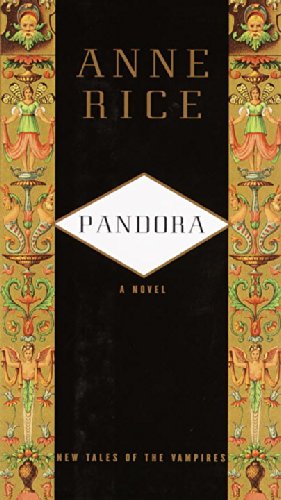 PANDORA: New Tales of the Vampires

Synopsis: Anne Rice, creator of the Vampire Lestat, the Mayfair witches and the amazing worlds they inhabit, now gives us the first in a new series of novels linked together by the fledgling vampire David Talbot, who has set out to become a chronicler of his fellow Undead.

The novel opens in present-day Paris in a crowded café, where David meets Pandora. She is two thousand years old, a Child of the Millennia, the first vampire ever made by the great Marius. David persuades her to tell the story of her life.

Pandora begins, reluctantly at first and then with increasing passion, to recount her mesmerizing tale, which takes us through the ages, from Imperial Rome to eighteenth-century France to twentieth-century Paris and New Orleans. She carries us back to her mortal girlhood in the world of Caesar Augustus, a world chronicled by Ovid and Petronius. This is where Pandora meets and falls in love with the handsome, charismatic, lighthearted, still-mortal Marius. This is the Rome she is forced to flee in fear of assassination by conspirators plotting to take over the city. And we follow her to the exotic port of Antioch, where she is destined to be reunited with Marius, now immortal and haunted by his vampire nature, who will bestow on her the Dark Gift as they set out on the fraught and fantastic adventure of their two turbulent centuries together.

Review: Anne Rice fans will greet Pandora: New Tales of the Vampires, the first of her new vampire chronicles, as hungrily as the Fang Gang facing a fresh new neck. Our heroine, Pandora, a senator's daughter in Augustus Caesar's day, flees to Antioch when her family gets killed and discovers the antidote to stern Roman rationalism in the occult wisdom of the East. "Something attacked my reason," Pandora writes. "The very thing the Roman Emperors had so feared in Egyptian cults and Oriental cults swept over me: mystery and emotion which claim a superiority to reason and law."

Pandora gets her sexy vampire initiation at the fangs of handsome Marius (who later inducted Rice's famed vampire Lestat). Pandora tells how a nice Roman girl became a vampire in modern Paris, but mostly the book celebrates the sights and sounds (and philosophical bloodlettings) of the classical world. Pandora is more like Robert Graves's sublime I, Claudius than Rice's The Complete Vampire Chronicles.

Yet Pandora is a logical extension of Rice's work, and Pandora is a combination of her past vampire heroes and the nakedly, horrifyingly autobiographical heroine of Rice's 1997 novel Violin. Now, Violin is remarkably messy, but it captures the volcanic passion that erupts in her best work--Rice calls it "a study in pain." Pandora is really a dramatized debate between passion and reason, which Pandora calls "male reason." She teases her vampire mentor: "Marius guarded his delicate rationality as a Vestal Virgin guards a sacred flame. If ever any ecstatic emotion took hold of me, he [would] tell me in no uncertain terms that it was irrational, irrational, irrational!" (To hear how close Pandora's voice is to her passionate creator, listen to the 1997 audiocassette Interview with Anne Rice.)

Rice's research gives fresh blood to her storytelling. Even her chronic third-act problem scarcely slows down this brisk romp of a novel. Pandora has intellectual thirst as well as blood lust, and she conveys the high old time Rice obviously had imbibing historical lore. "It is fun to read these mad Gnostics!" exults Pandora in the early Christian era. It is also fun to read this mad Pandora. Anne Rice hasn't been this fun to read in years.

1. Pandora: New Tales of the Vampires

4. Pandora: New Tales Of The Vampires

Book Description Alfred A. Knopf, U.S.A., 1998. Hardcover. Condition: Fine. Dust Jacket Condition: Near Fine. 1st Edition. First Edition/First Printing 1998. A fine copy in a near-fine and unclipped dustjacket. This copy is boldly signed by Anne Rice on the title page. Tight binding and clean throughout--a bright and crisp copy. The dustjacket has just a light of touch of rubbing or would also be fine. Protected in a new acrylic clear covering. Free shipping within the USA. Signed by Author(s). Seller Inventory # cfe17118

6. Pandora: New Tales Of The Vampires

8. Pandora: New Tales of the Vampires

Book Description Alfred a Knopf Inc, Westminister, Maryland, U.S.A., 1998. Hardcover. Condition: Very Good+. Dust Jacket Condition: Near Fine. 1st Edition. A Very Nice Copy - Signed By The Author On The Title Page. First Edition, First Printing. Book Is In Very Good + Condition. Boards Are Clean, Not Bumped. Fore Edges Have A Small Amount Of Shelf Wear. Interior Is Clean And Legible. Not Remaindered. Dust Jacket Is In Near Fine Condition. Not Chipped Or Crinkled. Not Price Clipped. Dust Jacket Is Covered By Mylar Wrapper. Thanks And Enjoy. Signed by Author(s). Book. Seller Inventory # 009282

10. Pandora: New Tales of the Vampires