Items related to THE PERFECT WITNESS 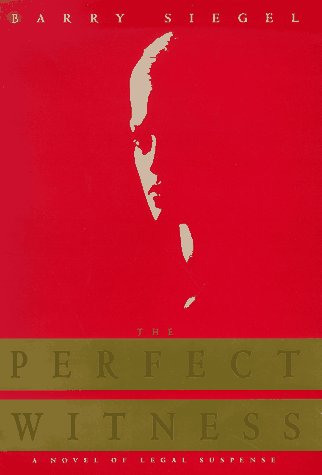 Murder. Courtroom suspense. Unforgettable characters. A California town drenched in fog and secrecy. Barry Siegel delivers one of the most original and exciting legal thrillers in years.

They used to be partners: Greg Monarch and Ira Sullivan, a couple of do-good lawyers in the central California town of La Graciosa. Ira, the charmer who glided through life. Greg, ever the searching idealist.

But it all went bad for Ira. Bad enough that he wakes up in jail one day staring at a death sentence for murder. And he can't remember if hes the killer. Only Greg Monarch has a prayer of getting him off--if he's willing to cross certain ethical lines.

Just how far should he go to save his former partner? As Greg Monarch wrestles with that question, he finds himself inexorably drawn into an ever-widening web of deceit and intrigue. The stakes are much higher then he first imagined; the forces gathering against Ira reach well beyond their coastal hamlet.

Layer by layer, Greg peels back a tissue of lies--and at the rotten core he comes to Sandy Polson. A self-possessed beauty with a shady past, Sandy is the kind of woman who can look you deep in the eyes and make you believe anything. Sandy says she was with Ira the night of the murder, says she saw the whole thing. The prosecution believes shes the perfect witness. But what if Monarch could persuade Sandy to tell the truth? Wouldnt Sandy then become the perfect witness for the defense?

A spellbinding story of crime and punishment, betrayal and revenge, Barry Siegel's new novel is a compelling journey into the heart of the courtroom and the human soul.

A beautifully crafted sense of place surrounds prizewinning journalist and nonfiction writer Barry Siegel's debut thriller in a cocoon of credibility, adding weight to a strong story. "If he closed his eyes, Jimmy almost could imagine himself back in the La Graciosa of old," Siegel writes about the fictional town on the central California coast. "Gone now was the cigar factory, the big wholesale meat market, the dairy, the Greyhound bus station... Henry's Hardware, where you could buy everything from kerosene lamps to washboards, was now an empty lot. The meat market was a dress store, the creamery a complex of sushi, cappuccino and moccasin shops. La Graciosa hadn't turned precious yet, but it was fighting the battle." In an area where the most important industry is no longer agriculture but nuclear energy, the town's own power structure has shifted. At its center is a dangerously ambitious district attorney, Dennis Taylor, who will do anything to win. Lawyer Greg Monarch, carving out a quiet living doing estates and wills, has worked for and against Taylor in the past, and has been badly burned on both sides. Now Taylor is about to nail Monarch's best friend and former law partner for murder, and Monarch has only a few faded defensive skills to fight what appears to be another losing battle. But as sharp and surprising as the book's resolution is, it's the image of the fading, changing town of La Graciosa that will stay in your memory.