Items related to THE VERY PERSISTENT GAPPERS OF FRIP 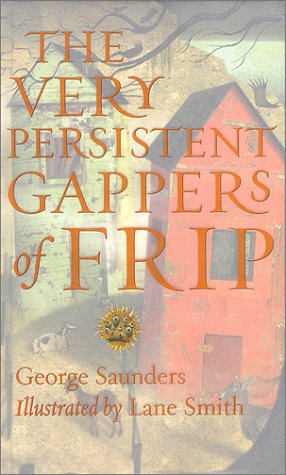 THE VERY PERSISTENT GAPPERS OF FRIP

Third work of fiction by author, following two short story collections, PASTORALIA and CivlWarLand in Bad Decline. Saunders most recently is the author of a striking first novel,LINCOLN IN THE BARDO. New, first edition, first printing (Villard, a subsidiary of Random House, similarly shows its first printings with number line beginning with '2'. and the words First Edition stated on colophon) in as new (delicate translucent dust jacket is perfect except for minute chipping at top edge, scarcely noticeable at top edge) mylar-protected dust jacket. Lavishly and beautifully illustrated in color by award-winning artist Lane Smith. {Not remainder-marked or price-clipped} BUND. Bookseller Inventory # 022917

Gappers will get your goat. Literally. If you don't brush them off and return them to the ocean, whence they arrive every day, these bright orange, many-eyed creatures will cover your goats, and the goats will stop giving milk.

In a village called Frip, goat's milk was the entire economy. Three families lived there--the Romos, the Ronsens, and a little girl named Capable and her widowed father, who wanted everything to remain the same. It didn't. One day, the Gappers, despite an average IQ of 3.7 (±.02), decided for a good reason to concentrate on Capable's goats. Oh, how the Romos and Ronsens turned their backs on the gapper-ridden Capable! Oh, how they indeed lorded it over her! What kinds of creatures are we, one wonders, when such selfishness so often springs up so spontaneously among us?

And, given the coldness of her neighbors' shoulders, what will Capable do about her Gapper plague, as her share of the economy dries up? Literally. The Very Persistent Gappers of Frip, with a brilliant story by award-ridden short-story master George Saunders and fifty-two haunting and hilarious illustrations by bestseller-plagued artist/author Lane Smith, answers that question. In doing so it tells a tale as ancient as the Bible and as modern as a memo from the Federal Reserve Board. And funnier than both--which isn't saying all that much, admittedly. You don't get to laugh and gaze in visual awe and pleasure all that often when the Golden Rule comes under such serious attack and such staunch defense as it did in Frip.

An adult story for children, a children's story for adults, an earthlings' story for aliens, an oceanside fable for the landlocked, a capitalist tool for anarchists, a fish story for loaves, The Very Persistent Gappers of Frip represents the classic instant of two young geniuses colliding and colluding. The result is--what else?--an instant classic!

The Very Persistent Gappers of Frip is that rarity, a fable that appeals equally to literate adults and id-crazed kids. Its author, George Saunders, is a Thomas Pynchon-approved, three-time O. Henry Award-winning surrealist writer; its artist, Lane Smith, is the Caldecott-honored illustrator of The Stinky Cheese Man and film designer of James and the Giant Peach. Nothing could evoke Saunders's simple yet extravagant story better than Smith's strange, painterly depictions of the seaside town of Frip, a place of ornery eccentrics and oddball animals. Smith combines some of the virtues of George Grosz, Dr. Seuss, and the Japanese prints called Ukiyo-e ("pictures of the floating world").

Gappers are baseball-sized, burr-shaped orange creatures with a compulsion to creep up out of the sea and fasten themselves to goats, whom they love. "When a gapper gets near a goat it gives off a continual high-pitched happy shriek of pleasure that makes it impossible for the goat to sleep, and the goats get skinny and stop giving milk," writes Saunders. Since Frip survives by selling goat milk, the children must brush gappers off the herd eight times daily and dump them into the ocean. You simply must see Smith's picture of Capable, the book's plucky heroine, emptying her gapper-sack from a precarious cliff picturesquely menaced by subtly colored waves. You'll be torn between lingering over the gorgeous artwork and flipping the page to see how Capable will ever cope with the gapper invasion of Frip, her obdurately past-obsessed widower papa, and her dumb, mean neighbors (two snooty, boy-obsessed girls and a family of singers who are harder on the ears than a keening gapper attached to the goat of its dreams). This is a slim tale, but unquestionably one quite in keeping with Saunders's prizewinning books. The title story of Pastoralia, for instance, is also a fable involving class struggle and people who get snooty about the difficulties of working with goats.

The Very Persistent Gappers of Frip is a grownups' book, a kids' book, an art book, and a cause for countless happy shrieks of pleasure. --Tim Appelo