Items related to THE PRINCE OF TIDES 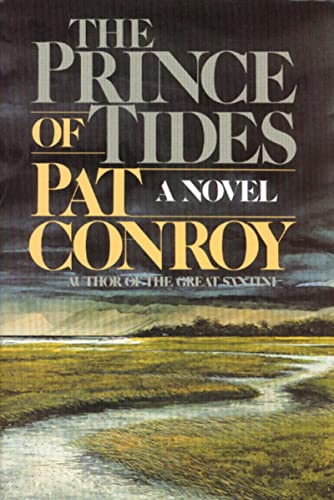 THE PRINCE OF TIDES

Title: THE PRINCE OF TIDES

In his most brilliant and powerful novel, Pat Conroy tells the story of Tom Wingo, his twin sister, Savannah, and the dark and violent past of the family into which they were born. Set in New York City and the lowcountry of South Carolina, the novel opens when Tom, a high school football coach whose marriage and career are crumbling, flies from South Carolina to New York after learning of his twin sister's suicide attempt. Savannah is one of the most gifted poets of her generation, and both the cadenced beauty of her art and the jumbled cries of her illness are clues to the too-long-hidden story of her wounded family. In the paneled offices and luxurious restaurants of New York City, Tom and Susan Lowenstein, Savannah's psychiatrist, unravel a history of violence, abandonment, commitment, and love. And Tom realizes that trying to save his sister is perhaps his last chance to save himself. With passion and a rare gift of language, the author moves from present to past, tracing the amazing history of the Wingos from World War II through the final days of the war in Vietnam and into the 1980s, drawing a rich range of characters: the lovable, crazy Mr. Fruit, who for decades has wordlessly directed traffic at the same intersection in the southern town of Colleton; Reese Newbury, the ruthless, patrician land speculator who threatens the Wingos' only secure worldly possession, Melrose Island; Herbert Woodruff, Susan Lowenstein's husband, a world-famous violinist; Tolitha Wingo, Savannah's mentor and eccentric grandmother, the first real feminist in the Wingo family. Pat Conroy reveals the lives of his characters with surpassing depth and power, capturing the vanishing beauty of the South Carolina lowcountry and a lost way of life. His lyric gifts, abundant good humor, and compelling storytelling are well known to readers of The Great Santini and The Lords of Discipline. The Prince of Tides continues that tradition yet displays a new, mature voice of Pat Conroy, signaling this work as his greatest accomplishment.

"Pat Conroy has created a huge, brash thunderstorm of a novel, stinging with honesty and resounding with drama.

Spanning forty years, this is the story of turbulent Tom Wingo, his gifted ad troubled twin sister, Savannah, and the dark and violent past of the extraordinary family to which they were born.

Filled with the vanishing beauty of the South Carolina lowcountry as well as the dusty glitter of New York City, The Prince Of Tides is Pat Conroy's most magnificent novel yet.

"A masterpiece than can compare with Steinbeck's East Of Eden... Some books make you laugh; some make you cry; some make you think. The Prince Of Tides is a rarity: It does all three." -- Detroit Free Press.

"A big sprawling saga of a novel, the kind Steinbeck and James Jones used to write, the kind John Irving keeps writing, the kind you can hole up with and spend some days with and put down feeling that you've emerged from a terrible, wonderful spell." -- San Francisco Chronicle.

"A brilliant novel that ultimately affirms life, hope and the belief that one's future need not be contaminated by a monstrous past." -- Chicago Tribune.