Items related to THE PYTHAGOREAN SOLUTION 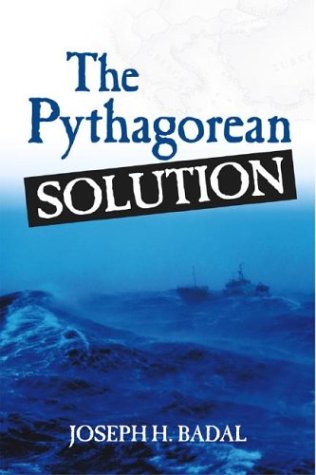 Signed by author and dated in year of publication on title page. As new, in blue cloth, in fine, mylar-protected dust jacket. A45. Bookseller Inventory # 11236

When American John Hammond arrives on the Aegean island of Samos, he is unaware of events that happened nearly six decades earlier that will embroil him in death and violence, and change his life forever. Late one night he finds Petros Vangelos, a Greek fisherman, lying mortally wounded in an alley. Hammond becomes the link between Vangelos and a Turkish tramp steamer that sank in a storm in 1942, carrying a fortune in gold and jewels. On board this boat, in a waterproof safe, are documents that implicate a German SS Officer in the theft of valuables from Holocaust victims and the laundering of those valuables by the Nazi’s Swiss banker partner.

Joseph Badal has worked for thirty-eight years in the banking and financial services industries, most recently serving as a senior executive and board member of a NYSE-listed mortgage REIT. He is currently President of Joseph Badal & Associates, Inc., a management consulting firm.

Prior to his finance career, Joe served as a commissioned officer in the U.S. Army in critical, highly classified positions in the U.S. and overseas, including tours of duty in Greece and Vietnam. He earned numerous military decorations.

He holds undergraduate and graduate degrees in International Finance (Temple University) and Business Administration (University of New Mexico), and is multi-lingual. He graduated from the Defense Language Institute, West Coast, and from Stanford University Law School's Director College.

Joe has had five suspense novels published, The Pythagorean Solution, Evil Deeds (Bob Danforth #1), Terror Cell (Bob Danforth #2), The Nostradamus Secret (Bob Danforth #3), and Shell Game. His next novel, The Lone Wolf Agenda, is the fourth in the Bob Danforth series, and will be released in 2013. He writes a blog titled Everyday Heroes, which can be viewed at josephbadal.wordpress.com.

His short story Fire & Ice will be included in an anthology titled Uncommon Assassins, which will be released in Fall 2012.

Joe has written dozens of articles that have been published in various business and trade journals, and is a frequent speaker at business and writers events.