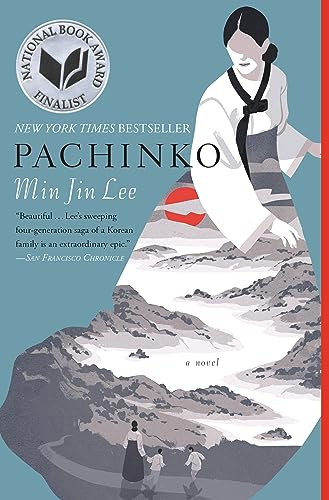 A New York Times Top Ten Book of the Year and National Book Award finalist, Pachinko is an "extraordinary epic" of four generations of a poor Korean immigrant family as they fight to control their destiny in 20th-century Japan (San Francisco Chronicle).

"There could only be a few winners, and a lot of losers. And yet we played on, because we had hope that we might be the lucky ones."

In the early 1900s, teenaged Sunja, the adored daughter of a crippled fisherman, falls for a wealthy stranger at the seashore near her home in Korea. He promises her the world, but when she discovers she is pregnant--and that her lover is married--she refuses to be bought. Instead, she accepts an offer of marriage from a gentle, sickly minister passing through on his way to Japan. But her decision to abandon her home, and to reject her son's powerful father, sets off a dramatic saga that will echo down through the generations.

Richly told and profoundly moving, Pachinko is a story of love, sacrifice, ambition, and loyalty. From bustling street markets to the halls of Japan's finest universities to the pachinko parlors of the criminal underworld, Lee's complex and passionate characters--strong, stubborn women, devoted sisters and sons, fathers shaken by moral crisis--survive and thrive against the indifferent arc of history.

An Amazon Best Book of February 2017: Beginning in 1910 during the time of Japanese colonialization and ending many decades later in 1989, Pachinko is the epic saga of a Korean family told over four generations. The family’s story starts with Hoonie, a young Korean man born with physical deformities, but whose destiny comes from his inner strength and kindness. Hoonie’s daughter, rather than bring shame on her family, leaves their homeland for Japan, where her children and grandchildren will be born and raised; yet prejudice against their Korean heritage will prevent them from ever feeling at home. In Pachinko, Min Jin Lee says much about success and suffering, prejudice and tradition, but the novel never bogs down and only becomes richer, like a sauce left simmering hour after hour. Lee’s exceptional story of one family is the story of many of the world’s people. They ask only for the chance to belong somewhere—and to be judged by their hearts and actions rather than by ideas of blood traits and bad seeds. --Seira Wilson, The Amazon Book Review

BookOutlet.com specializes in the sale of publisher overstocks and quality remainders (also known as "Bargain Books"). We have been in business over 15 years providing excellent customer service backed by our 110% Customer Satisfaction Guarantee. We have almost 90,000 titles, 18 million copies in-stock, covering most categories. Our children's selection is especially large offering 1st quality product for all age groups. Thank you for shopping with BookOutlet! Please contact us if you need to process a return; our customer service team will respond with a Return Authorization Number and once we have received your return you will be reimbursed for the cost of the item but not the shipping charge on the original order or the cost associated with sending the item back to us. We do not accept returns without a Return Authorization Number (RAN).


All our product is backed by our 110% Customer Satisfaction Guarantee.

Product is shipped next business day from our US or Canadian warehouse to ensure
quick delivery and no cross-border issues.

For more information please send us an email (service@bookoutlet.com)

Thank you for shopping with BookOutlet!