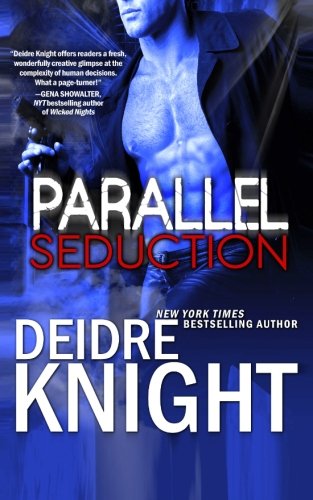 Synopsis: New York Times bestselling author Deidre Knight returns with yet another thrilling and out-of-this-world installment of her Parallel series. “You can always count on Knight to take an intriguing plot and bend it like a pretzel. This fascinating series is extremely intricate with its competing timelines and complex character growth. There’s never a dull moment in this terrific series!” – RT BOOKreviews, 4-star Review Lieutenant Scott Dillon isn't an overly complicated man—he has a rebel military operation to command and alien enemies to battle. But he also must cohabitate with humans in the middle of his unit’s temporary home in remote Wyoming—humans who suddenly interest him on a much more personal level than ever before. Well, one human has enticed him, to be more precise: a female FBI linguist who not only speaks his native language, but managed to save his life in one of the worst fire fights he ever experienced—despite also being blind. That she's beautiful and alluringly sensual only arouses his interest even more. Now, Hope Harper is trapped in the middle of Scott's own rebel camp, and he's not sure if he should broker her return to the FBI, or keep her safe behind the walls of their compound. The only problem is that a man has arrived from the future, a trespasser with a maddening desire for Hope. A man who seems to have an agenda of his own...one that includes making Hope his own lover, even though he's enemy to both human and Refarian alike. As their mutual enemies close in and Hope wrestles with her burning attraction to both men, Scott must decide whether saving Hope will mean sacrificing whatever future he might have with her.

About the Author: Deidre Knight lives in Madison, GA.