Skip to main content
Home Rosenzweig, Roy; Blackmar, Elizabeth The Park and the People: A History of Central Park [Hardcover] ... 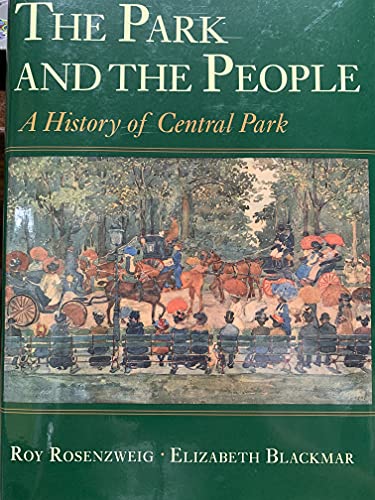 The Park and the People: A History of Central Park [Hardcover] Rosenzweig, Roy and Blackmar, Elizabeth

Synopsis: Traces the history of New York's Central Park, describing its creation and the political, social, and cultural changes that have shaped its development

From the Back Cover: In this superb and handsomely illustrated book - the first full-scale history of the park ever published - Roy Rosenzweig and Elizabeth Blackmar tell the dramatic story of the creation of Central Park, of the people who built it and have used it. The book chronicles the launching of the park project, the disputes surrounding its design and management, the job of constructing it, and the various ways it has served generations of New Yorkers. Throughout, the authors delineate the politicians, business people, artists, immigrant laborers, and city dwellers who are the key players in the tale. In tracing the park's history, the writers also give us the history of New York. They explain how squabbles over politics, taxes, and real estate development shaped the park and describe the acrimonious debates over what a public park should look like, what facilities it should offer, and how it should accommodate the often incompatible expectations of different groups of parkgoers. The authors have uncovered surprising information about the immigrants and African Americans who were displaced from the park site, and they offer a critical reassessment of the famous collaboration of the park's designers, Frederick Law Olmsted and Calvert Vaux. In rich detail, they describe working-class New Yorkers fighting for Sunday park concerts and against the practice of renting park seats for a nickel. They look back at the origins of the zoo and museums at the park's borders. They follow the battle between the twentieth-century reformers who wanted to introduce playgrounds and ball fields and the preservationists trying to protect the original Olmsted and Vaux design, and they explain the dramatic changes broughtabout by the social impulses of the New Deal and by Robert Moses. Rounding out the story, the authors take in the park's recent history: rising fears of crime in the 1950s, the "be-ins" and anti-war demonstrations of the 1960s, the devastating fiscal crisis of the 1970s, and the restoration of the park in the 1980s by the Central Park Conservancy. But the authors' aim is much wider: they also show that conflicting visions of how a park should be managed and used raise larger issues about the meaning of the "public" in a democratic society. Who is the public? How can people take part in making decisions about public institutions? How do we create public space where people of diverse social and cultural backgrounds will feel welcome? These are questions that communities across the nation will continue to debate. Parkgoers and city dwellers everywhere will be enthusiastic readers of The Park and the People, as will those interested in urban, architectural, social, and cultural history, urban planning, and landscape architecture.

1. The Park and the People. A History of Central Park

2. The Park and the People : A History of Central Park

3. The Park and the People; A History of Central Park

4. The Park and the People: A History of Central Park

5. The Park and the People: A History of Central Park

Book Description Hardcover. Condition: Good. No Jacket. Item is in good condition. Some moderate creases and wear. This item may not come with CDs or additional parts including access codes for textbooks. This may not have a dust jacket. Might be an ex-library copy and contain writing/highlighting. Photos are stock pictures and not of the actual item. Seller Inventory # DS-0801425166-3

6. The Park and the People: A History of Central Park