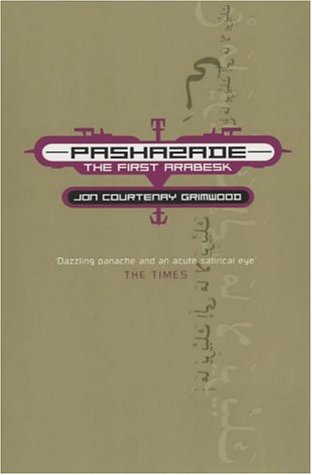 From the Inside Flap: Part mystery, part speculative fiction, and wholly unforgettable, Jon Courtenay Grimwood's celebrated Arabesk series portrays the dark, hard-boiled story of a man out to prove his innocence in an alternate world where the facts aren't always the same as the truth . . . and murder isn't the worst that can happen.
It's a twenty-first century hauntingly familiar-and yet startlingly different from our own. Here the United States brokered a deal that ended World War I, and the Ottoman Empire never collapsed. And lording it over all sits the complex, seductive, and bloodthirsty North African metropolis of El Iskandryia. Almost nothing is what it seems to be in El Isk, and Ashraf Bey is no exception.
Neither the rich Ottoman aristocrat everyone thinks he is, nor the minor street criminal once shipped off to prison when he fell foul of his Chinese Triad employers-the fact is that Raf has as little idea who he is as anyone else.
With few clues and no money, all Raf has is a surname hinting at noble heritage and an arranged marriage to a woman who hates him. But nothing Ashraf al Mansur learns about himself is as unexpected-or as terrifying-as the brutal murder he's accused of committing. Now, as a hunted man with the welfare of a precocious young girl in his irresponsible hands, Raf must race after a killer through an unforgiving city as foreign to him as the truth he'll uncover about himself.

Book Description Earthlight, 2002. Paperback. Condition: Good. MAY OR MAY NOT HAVE A DUST JACKET Usual signs of a well read book but good overall condition. May not look good on your bookcase after reading and probably not suitable as a present unless hard to find elsewhere MOST IMAGES ARE STOCK PHOTOS. IF YOU NEED A PARTICULAR EDITION PLEASE SEND US A MESSAGE BEFORE PURCHASING SO THAT WE CAN CHECK THAT THE ONE ON OFFER IS THE ONE YOU REQUIRE. SECURE DAILY POSTING FROM UK. 30 DAY GUARANTEE. Seller Inventory # mon0002685330

Book Description Earthlight, 2002. Paperback. Condition: Good. All orders are dispatched the following working day from our UK warehouse. Established in 2004, we have over 500,000 books in stock. No quibble refund if not completely satisfied. Seller Inventory # mon0003542118

Book Description Earthlight 02/04/2002, 2002. Condition: Good. Will be shipped promptly from UK warehouse. Book is in good condition with no missing pages, no damage or soiling and tight spine. There may be some dog-eared pages showing previous use but overall a great book. Seller Inventory # 9053-9780671773687

Book Description -. Paperback. Condition: Very Good. Pashazade: The First Arabesk This book is in very good condition and will be shipped within 24 hours of ordering. The cover may have some limited signs of wear but the pages are clean, intact and the spine remains undamaged. This book has clearly been well maintained and looked after thus far. Money back guarantee if you are not satisfied. See all our books here, order more than 1 book and get discounted shipping. Seller Inventory # 7719-9780671773687

Book Description Earthlight 02/04/2002, 2002. Condition: Very Good. Shipped within 24 hours from our UK warehouse. Clean, undamaged book with no damage to pages and minimal wear to the cover. Spine still tight, in very good condition. Remember if you are not happy, you are covered by our 100% money back guarantee. Seller Inventory # 6545-9780671773687

Shipping: US$ 2.62
From United Kingdom to U.S.A.
Destination, rates & speeds