Items related to Passport Into the Wild 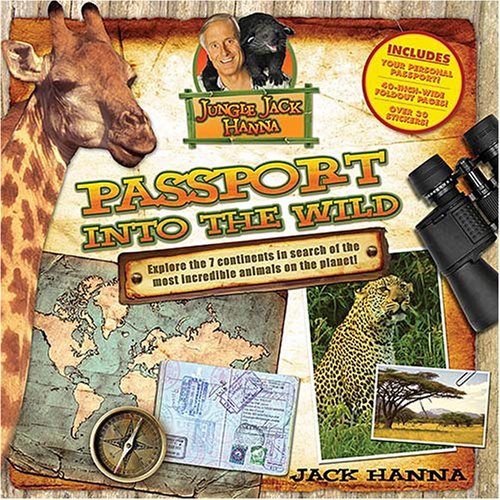 Passport Into the Wild

Title: Passport Into the Wild

Grab your passport and travel into the wilds of the world with Jungle Jack Hanna!

Super adventurous and highly educational, Passport into the Wild takes readers on a realistic exploration of all seven continents and the animals that live there. Jungle Jack fills all eight double gatefolds with photos, fun animal facts, and first-hand accounts of adventures with these animals in the wild. Readers will explore the terrain, meet the people, and come face-to-face with the animals that inhabit each continent. This unique format also includes a passport for readers with stickers from each continent to remind them of the animals they've encountered in their journeys.

"Jungle Jack" Hanna is the world's best-known animal expert and Director Emeritus of the Columbus Zoo. Jack has appeared on national television for well over twenty years, educating and generating wildlife enthusiasm on programs such as Good Morning America, Late Show with David Letterman, Ellen, and many others. His own wildlife television series include Jack Hanna's Animal Adventures, one of the longest running syndicated wildlife series in television history, and his latest series Jack Hanna's Into the Wild, which is now honored with the prestigious Emmy award.

Jack Hanna is the Director Emeritus of the Columbus Zoo. In addition to writing award-winning children's books, he also hosts the Emmy-award winning, Into the Wild show. He and his animals are frequent and favorite guests of David Letterman and Larry King.

We are a mail-order book business specializing in high quality books in a wide variety of fields. We emphasize the accurate description of books, fair pricing and excellent customer service. Customer satisfaction is guaranteed or the price of the book is promptly refunded.


Please order with confidence directly through Abebooks. Your credit card order will be securely processed, and we will ship the order out by the next business day.
EA Lombardo
PO Box 6713
Longmont, CO 80501
303-594-8627