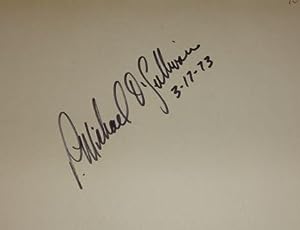 A fine hardcover copy missing the scarce dust jacket. First Edition. SIGNED & DATED BY THE PHOTOGRAPHER on the front free end paper. A very decent copy. Small owner's signature on end paper. No bumped corners to book. Book is very tight. *** WE BOX AND SHIP ALL BOOKS WITH USPS TRACKING. *** WE HAVE BEEN BUYING AND SELLING USED BOOKS FOR OVER 37 YEARS. Bookseller Inventory # 000485E

Dust jacket notes: "Patriot Graves: Resistance in Ireland is a unique documentation - in words and photographs - of the Irish Republican Movement. It presents a radically different view of events in Ireland than Americans have heard so far, for it argues that the troubles there are undeniably part of a war against privilege and British colonialism. This book is about a revolutionary organization in action. Since 1966, P. Michael O'Sullivan has spent a total of almost a full year living with Nationalists throughout Ireland. Because he is the only journalist who has gained their confidence, Patriot Graves shows the I.R.A. with an extraordinary openness: we see guerillas on the run, in the field, on bombing and sniping missions, and at home with family and friends. It is as uncompromising as the terms of the centuries-old Irish struggle. This is not a romantic book, but one which brings into focus the life - and death - that is a revolution. In addition, there are some penetrating insights into the revolutionary mind. there are ten interviews with both citizens and crucial leaders like Joe Cahill, Daithi O'Connell and Sean MacStiofain. The book shows the broad base of the republican Movement, a movement which includes all the Irish, North and South - the farmers, villagers, factory workers, grocers, women and children. In Patriot Graves it becomes clear that the issue which divides the Irish is one of politics rather than religion, and that the violence is a temporary by-product of a struggle among people who are committed to obtaining an independent Republic of Ireland, united under one 32-county government. The book gives exciting, on-the-spot coverage of crucial events - events which no other journalist was allowed to cover." Illustrated throughout with black-and-white photographs by the author.