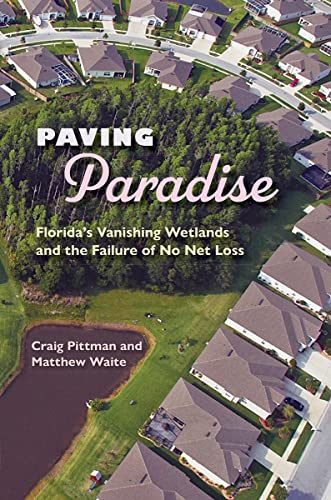 Paving Paradise: Florida's Vanishing Wetlands and the Failure of No Net Loss (Florida History and Culture)

What is happening to Florida's "protected" wetlands?

"This is an exhaustive, timely, and devastating account of the destruction of Florida's wetlands, and the disgraceful collusion of government at all levels. It's an important book that should be read by every voter, every taxpayer, every parent, every Floridian who cares about saving what's left of this precious place."--Carl Hiaasen

"Pittman and Waite pulled the lid off federal and state wetlands regulation in Florida and peered deep into the cauldron of 'mitigation,' 'no net loss,' 'banking,' and the rest of the regulatory stew. For anyone interested in wetlands generally, and in Florida environmental issues in particular, this is an eye-opening, must-read book."--J. B. Ruhl

Since 1990, every president has pledged to protect wetlands, and Florida possesses more than any state except Alaska. And yet, since that time Florida has lost more than 84,000 acres of wetlands that help replenish the water supply and protect against flooding.

How and why the state’s wetlands are continuing to disappear is the subject of Paving Paradise. Journalists Craig Pittman and Matthew Waite spent nearly four years investigating the political expedience, corruption, and negligence on the part of federal and state agencies that led to a failure to enforce regulations on developers. They traveled throughout the state, interviewed hundreds of people, dug through thousands of documents, and analyzed satellite imagery to identify former wetlands that were now houses, stores, and parking lots.

The result was an award-winning series, "Vanishing Wetlands," of more than twenty stories in the St. Petersburg Times, exposing the unseen environmental consequences of rampant sprawl. Expanding their work into book form in the tradition of Michael Grunwald's The Swamp, Pittman and Waite explain how wetland protection has become a taxpayer-funded program that creates the illusion of environmental protection while doing little to stem the tide of destruction.

Craig Pittman, a Florida native, and Matthew Waite, originally from Nebraska, are both reporters at the St. Petersburg Times. Their work has twice earned the top investigative reporting prize in the nation from the Society of Environmental Journalists as well as the Waldo Proffit Award for Excellence in Environmental Journalism in Florida.