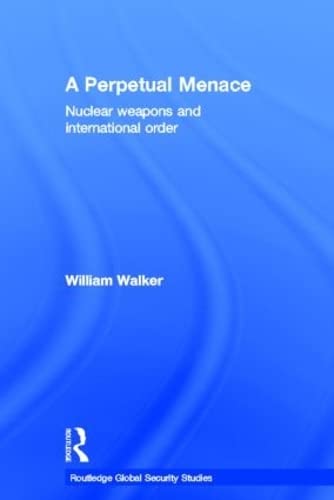 Written by a leading scholar in the field of nuclear weapons and international relations, this book examines ‘the problem of order’ arising from the existence of weapons of mass destruction.

This central problem of international order has its origins in the nineteenth century, when industrialization and the emergence of new sciences, technologies and administrative capabilities greatly expanded states’ abilities to inflict injury, ushering in the era of total war. It became acute in the mid-twentieth century, with the invention of the atomic bomb and the pre-eminent role ascribed to nuclear weapons during the Cold War. It became more complex after the end of the Cold War, as power structures shifted, new insecurities emerged, prior ordering strategies were called into question, and as technologies relevant to weapons of mass destruction became more accessible to non-state actors as well as states.

William Walker explores how this problem is conceived by influential actors, how they have tried to fashion solutions in the face of many predicaments, and why those solutions have been deemed effective and ineffective, legitimate and illegitimate, in various times and contexts.

William Walker is Professor of International Relations at the University of St Andrews. His research interests include nuclear politics and the governance of technology.

Shipping: US$ 7.05
From India to U.S.A.
Destination, rates & speeds
#renderBDPScripts()