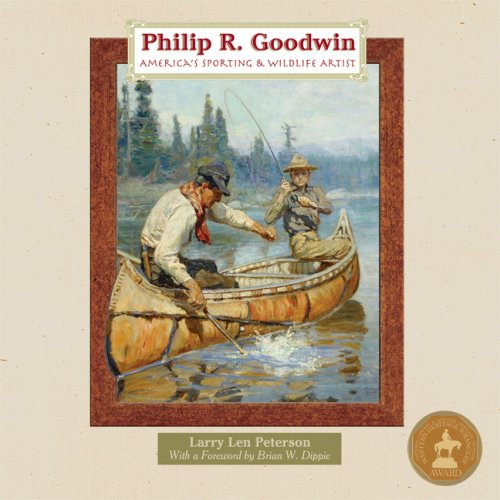 Synopsis: Philip R. Goodwin (1881 1935), a contemporary and friend of Charles Russell, was a well-known artist in the early twentieth century. His illustrations and oil and watercolor paintings of wildlife, cowboys, lumberjacks, fishermen, and hunters graced calendars and the covers of magazines, including National Sportsman and the Saturday Evening Post. In 1903, at the beginning of his career, he illustrated the first edition of Jack London s Call of the Wild. In 1919 he created an illustration for Winchester know as Horse and Rider, which is perhaps one of the most enduring and recognized western advertising images ever designed. Though his art fell into obscurity in the latter half of the twentieth century, today it is highly sought after by collectors.
This handsome volume contains more than 550 of Goodwin s images, hundreds in full color and many of them held in private collections and rarely available for public viewing. Personal photographs of Goodwin and his friends, along with letters, some from Charles Russell, complement the engaging text. Originally published in 2001 by the Coeur D Alene Art Auction and Settlers West Galleries, Philip R. Goodwin: America s Sporting & Wildlife Artist won the prestigious Wrangler Award in 2002 from the National Cowboy and Western Heritage Museum in Oklahoma City.

About the Author: Larry Len Peterson is an enthusiastic collector of western art, including original art, books, paper memorabilia, and photographs. He is past chairman of the National Advisory Board to the C. M. Russell Museum in Great Falls, Montana. Peterson is author of more than forty publications, including Charles M. Russell, Legacy (1999); A Most Desperate Situation: Frontier Adventures of a Young Scout,
1858 1864 (2000); The Call of the Mountains: The Artists of Glacier National Park (2002); and L. A. Huffman: Photographer of the American West (2003).

Brian W. Dippie is a widely acknowledged expert on the art, history, and popular culture
of the American West. He wrote Bards of the Little Big Horn; Catlin and His Contemporaries; West Fever; and Charles M. Russell, Word Painter: Letters, 1887-1926.

Book Description Mountain Press Publishing Company 2007-10-01, 2007. Hardcover. Condition: Good. No Jacket. Item is in good condition. Some moderate creases and wear. This item may not come with CDs or additional parts including access codes for textbooks. This may not have a dust jacket. Might be an ex-library copy and contain writing/highlighting. Photos are stock pictures and not of the actual item. Seller Inventory # DS-0878425403-3

Book Description Mountain Press Publishing Company, 2007. Condition: Good. A+ Customer service! Satisfaction Guaranteed! Book is in Used-Good condition. Pages and cover are clean and intact. Used items may not include supplementary materials such as CDs or access codes. May show signs of minor shelf wear and contain limited notes and highlighting. Seller Inventory # 0878425403-2-4