Home Johnson, Philip by Hilary Lewis and John O'Connor Philip Johnson: The Architect in His Own Words 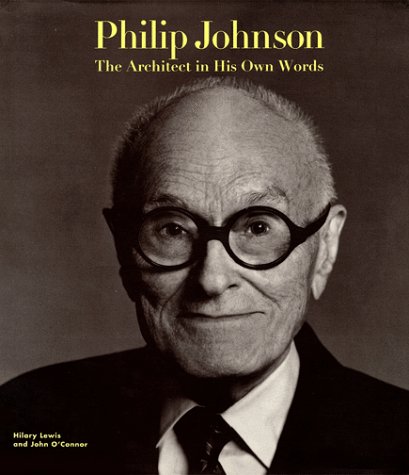 Philip Johnson: The Architect in His Own Words

Synopsis: The career of Philip Johnson, dean of American architecture and international spokesperson for an entire generation of modern and postmodern architects, spans over 50 years and countless projects. In a series of interviews, the architect selects and discusses 20 favorite buildings, providing a rare glimpse into the mind of a master architect at work. Photographs.

Review: Philip Johnson is one of the most influential architects of the 20th century, not so much because of his chameleon-like design approach, but because of his intelligence and articulateness. As the Museum of Modern Art's founding architecture curator in the early 1930s, he helped establish modernism in this country, and as the architect of New York's AT&T building--the notorious "Chippendale skyscraper"--he gave postmodernism commercial viability on a large scale during the 1980s.

In between, he built his famous glass house in 1949--the first in America--and designed several of Houston's best office towers, including Pennzoil Place, in the 1970s. Witty, wealthy, and well-connected, he was also the most powerful figure in the profession's cultural politics--a colleague once dubbed Johnson "the Godfather of architecture."

When this book was first published, Johnson was still practicing at age 88, and his intellect was undimmed. The text is an extended interview conducted by the authors, rather than the subject's thoughts written out for the ages. It's a good read, for Johnson is candid, unpretentious, astute, and entertaining in his stories about clients and how the projects unfolded. Think of this as oral history dispensed by a great raconteur who was at the center of the architectural universe for two-thirds of a century. Physically, this 200-page book is large-format and well laid out. The photos are numerous and first-rate, but oddly the plans are usually too big, and thus not as sharp as expected. --John Pastier

1. Philip Johnson: The Architect in His Own Words (Signed First Edition)

Book Description Rizzoli International Publications, Inc, New York, 1994. First edition. Hardcover. First printing. 200 pages. Preface by John O'Connor. Introduction by Hilary Lewis. Includes text by Johnson and numerous color and black and white images. A fine copy in a very near fine dust jacket with a small tear to the top of the spine. Signed by O'Connor on the front free endpaper and uncommon as such. Seller Inventory # 152199

2. Philip Johnson: The Architect in His Own Words

3. Philip Johnson: The Architect in His Own Words

4. Philip Johnson: The Architect in His Own Words