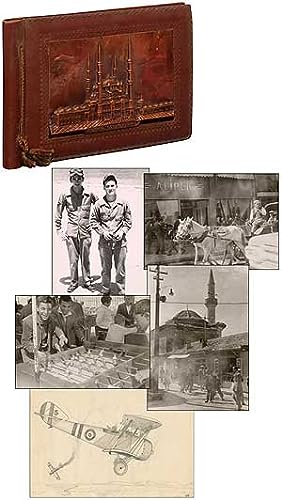 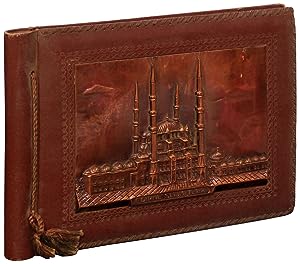 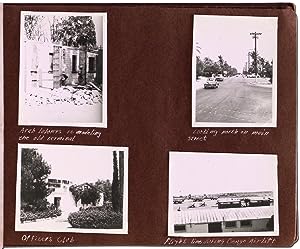 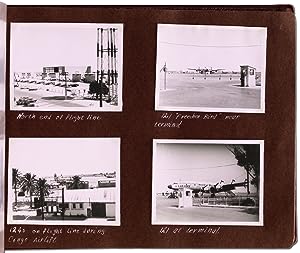 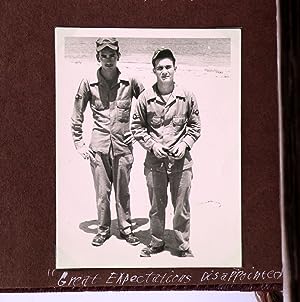 Photo album. Oblong quarto. Approximately 14" x 10". Full cloth boards with a copper plate replica of the Selimiye Mosque (Edirne, Turkey) in relief on the front cover. Very good. Contains 86 black and white photographs neatly held in place on thick paper leaves with corner mounts, interleaved with embossed tissue guards. Laid-in at the rear are five 12" x 8" pencil sketches, three travel documents, and two additional photographs. The album was put together in 1961 by Charles Simpkins of the 848th Aircraft Control and Warning Squadron. It is divided into one section with 36 photographs (measuring 4.5" x 3.5") of the Wheelus U.S. Air Force Base in Libya (now Tripoli's Mitiga International Airport), and a second section with 50 photographs (measuring 5" x 3.5") of various street scenes taken in Istanbul, Turkey. Laid-in is Simpkins's Signed travel voucher from 1961. The Libyan set of 36 prints are identified with manuscript captions written in white ink on the paper sheet directly underneath each print. This historic base, known as the "Hell Hole" for its scorching heat, was built by the Italians in 1923 and was used by the Germans during the North African Campaign. Captured by the British in 1943, it was taken over by the Americans in 1945 and became home to 4,500 Americans at the height of the Cold War. The photographs document the base when it was being used for a covert airlift campaign during the Congo Crisis of the early 1960s. They include shots of USAF 124s and other planes on the flight line during the Airlift, and various street scenes taken throughout the base: Arab laborers, the Mirage restaurant, the NCO club, a Jewish Chapel, and much more. Also included are shots of Americans and Libyans at leisure on the beach. The second set of 50 prints is a fascinating series of informal street scenes taken in Istanbul while Simpkins was most likely on vacation in September 1961. As none are identified, one can easily get lost among these shots of Turkish vendors, peddlers, musicians, and horse drawn carts, as they make their way through street markets and carnivals, with the occasional view of a mosque's minarets in the background. Various candid portraits include children at play, boys playing foosball, and all manner of outdoor vendors selling their wares. The five laid in pencil sketches are reasonably accomplished drawings of a B-718 USAF jet in flight, a Brayer tank truck, a Mercedes 300 SL, an old Roadster, and a World War I British fighter plane. Bookseller Inventory # 380016


Orders usually ship within 2 business days. Our $10 rate is for UPS or Priority Mail. Our $4.50 rate is media mail which can take a week or two, or a month or two (rarely, but has happened). We email tracking information for all domestic shipments. Shipping costs are based on books weighing 2.2 LB, or 1 KG. If your book order is heavy or oversized, we may contact you to let you know extra shipping is required.