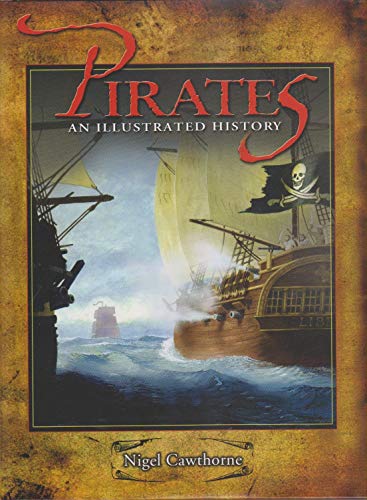 Synopsis: An erudite explanation of everything piratical, this book portrays the pirates, their weapons, their ships, their victims, and the historical background to all the saltwater tales of both pirates and navy. The exploits of the most famous pirates are also recounted here, from the cold-hearted ruthlessness of Blackbeard to the derring-do of Bartholomew Roberts, whose views were summed up by his motto: “A merry life, and a short one."

About the Author: Nigel Cawthorne studied at University College, London, where he gained an honours degree in physics, before turning to writing as a career. He has been a writer and editor for more than twenty-five years, the last twenty-one freelance. He has written, contributed to, and edited more than eighty books including Pirates: An Illustrated History, Turning the Tide: Decisive Battles of the Second World War, Stalin: The Murderous Career of the Red Tsar, and Mafia: History of the Mob. His work has appeared on both sides of the Atlantic in a variety of publications, including the New York Times and Financial Times, and he has even appeared on the Joan Rivers Show. Nigel lives in Bloomsbury in the heart of literary London.

Book Description Arcturus Publishing Ltd, 2013. Hardcover. Condition: Used; Good. **Simply Brit** Shipped with Premium postal service within 24 hours from the UK with impressive delivery time. We have dispatched from our book depository; items of good condition to over ten million satisfied customers worldwide. We are committed to providing you with reliable and efficient service at all times. Seller Inventory # 3030718

Book Description Arcturus Publishing Limited, 2013. Condition: Good. Ships from the UK. Former Library book. Shows some signs of wear, and may have some markings on the inside. Seller Inventory # GRP91620824

Book Description Paperback. Condition: Very Good. The book has been read, but is in excellent condition. Pages are intact and not marred by notes or highlighting. The spine remains undamaged. Seller Inventory # GOR006603503

Book Description Paperback. Condition: Good. The book has been read but remains in clean condition. All pages are intact and the cover is intact. Some minor wear to the spine. Seller Inventory # GOR006572978

Book Description Arcturus Publishing Limited, 2013. Condition: Good. A+ Customer service! Satisfaction Guaranteed! Book is in Used-Good condition. Pages and cover are clean and intact. Used items may not include supplementary materials such as CDs or access codes. May show signs of minor shelf wear and contain limited notes and highlighting. Seller Inventory # 1782123326-2-4