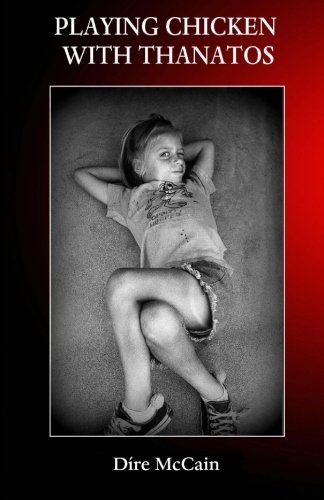 Synopsis: “Díre McCain has given us a mesmerizing, startling, lyrical addition not just to the literature of drugs and madness, but to literature itself.” — Nick Tosches

Playing Chicken With Thanatos tells a hard-hitting yet sympathetic tale of a precocious forgotten child who sought refuge in self-annihilation, and ultimately had to choose between doom and survival.

Set primarily in Southern California in the 1980s and 90s, the narrator takes you headlong on an intensely revealing and turbulent odyssey through the abysses of madness and junkiedom to the peaks of liberation and personal evolution.

Born from the author’s harrowing formative experiences, Playing Chicken With Thanatos transcends autobiography, evades the niche of vicarious voyeurism, and reaches out an empathetic, nonjudgmental hand to anyone who’s ever teetered over that ineffable precipice.

About the Author: Díre McCain is a five-dimensional creature who fell through a Lorentzian traversable wormhole into a three-dimensional universe, landing on what was, at the time, the second rock from the Sun. After a nebulous sojourn in the Zone of Avoidance, while trapped in a self-induced state of suspended animation, she was unwittingly converted into a transportable energy pattern and ultimately rematerialized on 21st century Earth. She was Publisher and Editor of Paraphilia Magazine from its inception in 2008 until its retirement in 2017. In addition to her two books, Playing Chicken With Thanatos and A Scar Is Borne, her words can be found scattered about in various places, both online and in print.

Book Description Apophenia, 2013. Condition: Good. A+ Customer service! Satisfaction Guaranteed! Book is in Used-Good condition. Pages and cover are clean and intact. Used items may not include supplementary materials such as CDs or access codes. May show signs of minor shelf wear and contain limited notes and highlighting. Seller Inventory # 0615903150-2-4