Items related to Poems by Marjorie Kinnan Rawlings: Songs of a Housewife 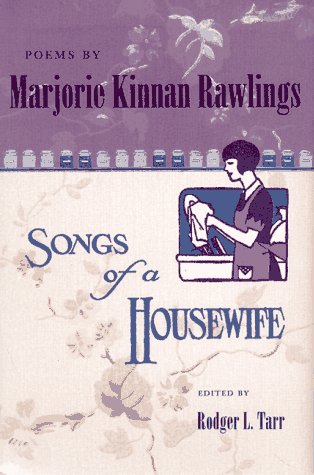 Poems by Marjorie Kinnan Rawlings: Songs of a Housewife

"A fascinating tapestry woven from the lives of women who had won the right to vote a mere six years earlier. In Songs of a Housewife, we hear the voice of an emerging feminist, a voice that stubbornly and--given the political climate of the 1920s--courageously insists that women be respected. Fans of Marjorie Kinnan Rawlings will be surprised and ultimately delighted by this long overdue collection."--Connie May Fowler, author of Sugar Cage and Before Women Had Wings

"Rawlings’s poetry is surprisingly good. . . . solid, traditional poetry about subjects that will never go out of fashion."—Joel Myerson, University of South Carolina

More than a decade before writing The Yearling and Cross Creek, Marjorie Kinnan Rawlings was a young housewife-journalist living in Rochester, New York.  In 1926, the Rochester Times-Union did a trial run of her column-in-verse, Songs of a Housewife.  To the editor’s surprise, the column proved immensely popular; over the next two years, Rawlings published a poem a day, six days a week, and gained a wide syndication.  When she moved to Florida in 1928, however, the poems were forgotten and--until this collection of roughly half of them--never reprinted.
In the 250 poems collected here, Rawlings presents homespun advice on such subjects as the trials and tribulations of being a cook, mother, friend, relative, and neighbor.  She dedicates many to her favorite subjects: gardening, cooking, pets, and nature.  Throughout, her goal is to entertain, to educate, and to give a voice to the housewife who sees her role as a creative and important one.  In the process, of course, she also invariably reveals a great deal about herself, and devoted readers will be curious to see how the Marjorie Kinnan Rawlings they know and love is evident here, in these early and spirited poems.
Because little is known about Rawlings’s life during this period, Songs of a Housewife is valuable as commentary on her evolving attitudes as a woman and as a writer, and many of the same themes appear in her later works.  As a reflection of the life of a middle-class woman struggling to carve out an independent and fulfilling role for herself, these poems also offer a rare insight into the life of women in the late 1920s.

This charming collection of poems that Marjorie Kinnan Rawlings (The Yearling, Cross Creek) wrote in the 1920s were so popular that they appeared one-a-day in a New York newspaper for two full years. Organized by task, the poems graphically depict the life of a housewife (mending, baking, dusting, and the joy of a sunny window) with wisdom and humor. In the days before convenience stores and microwaves, Rawlings reminds us of the horror of having company show up with nothing fixed to feed them. Or in a more timeless vein, the disdain a harried mother feels for the neighbor who has all her Christmas shopping done and wrapped early. Songs of a Housewife is one of a kind.