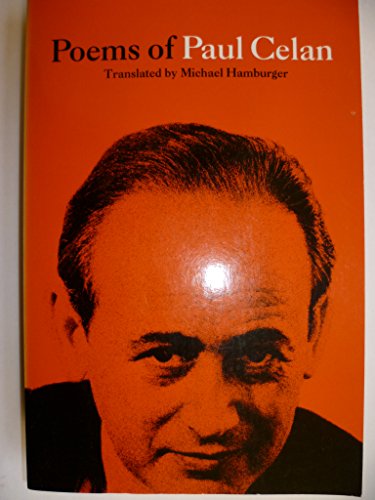 Synopsis: Bilingual collection of poetry by the German poet considered by many the major European poet since 1945

Review: George Steiner has declared, "The quality of aloneness in Celan is pitiless." Paul Celan's hermetic, Holocaust-haunted works call out to us and then resort to difficulty, private language, and--in the late art--splintering and silence. Celan, who committed suicide in 1970, was born in Romania and wrote in a German taut with archetypes, archaisms, and neologisms, which has both frustrated and inspired fellow poets and translators. Michael Hamburger has been more daring than most. Laboring on a dual-language selection, he had to resort to biographical clues to unravel entire poems; he bluntly states that "much of Celan's later poetry can be intuitively grasped, but not rendered in another language, without as much knowledge as possible of his sources.... What makes them difficult is the terrain itself--a terrain in which milk is black, death is the all-encompassing reality--not the nature of its charting."

The reference is to Celan's most famous work, "Todesfuge" ("Death Fugue"), a poem which grows more harrowing with each reading, particularly the iconic lines "death is a master from Germany his eyes are blue / he strikes you with leaden bullets his aim is true." Hamburger's translation begins:

Though this is among Celan's more accessible works, most of the poems in Hamburger's volume will reward, and stun, the attentive reader.
"About this title" may belong to another edition of this title.

Book Description Persea Books, 1989. Condition: Good. Edition Unstated. Former Library book. Shows some signs of wear, and may have some markings on the inside. Seller Inventory # GRP10173466

Book Description Persea, New York, 1989. Hardcover. 350p., introduction, bi-lingual texts in German and English on facing pages, indexes, very good first expanded English-language edition in quarter-cloth boards and unclipped dj with heavy sunning to spine and cover panels, also signs of wear. Exiled to Paris after his parents were taken by the Nazis to a concentration camp where they perished this German-Jewish poet became a major voice for the victims of Holocaust Germany in the 1940s and 1950s. He drowned himself in 1970. Seller Inventory # 222406

Book Description Persea Books, 1989. Condition: Good. A+ Customer service! Satisfaction Guaranteed! Book is in Used-Good condition. Pages and cover are clean and intact. Used items may not include supplementary materials such as CDs or access codes. May show signs of minor shelf wear and contain limited notes and highlighting. Seller Inventory # 0892551402-2-4