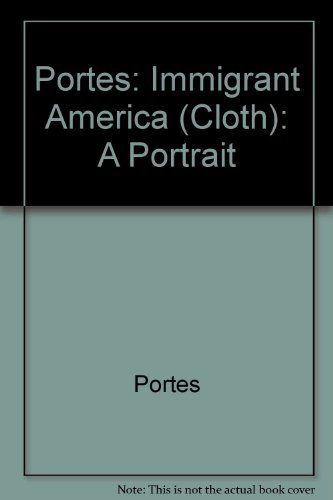 Synopsis: Widely acclaimed for its superb portrayal of immigration and immigrant lives in the United States, this work, first published in 1990, has become a classic. This second edition has been thoroughly expanded and updated to reflect current demographic, economic, and political realities, and the vertiginous pace of historical change in the post-Cold-War era. The authors have written two new chapters, infused the entire text with new data, and added a vivid array of new illustrations. As immigration moves to the center of national debate, this new edition is indispensable for framing and informing issues that promise to be even more hotly and urgently contested.

The United States of the late twentieth century is a new nation of immigrants. Not since the peak years of immigration before World War I have so many newcomers made their way to America: During the 1980s about six million immigrants and refugees were legally admitted, and a sizable but uncertain number of others entered without legal status. This definitive new book offers a broad portrait of the multicultural people who comprise the latest wave of immigrants to the United States. Overwhelmingly Asian and Latin American yet defying widespread stereotypes of immigrants, they come in luxurious jetliners and the trunks of cars, by boat and on foot. Manual laborers and polished professionals, entrepreneurs and exiles, these immigrants reflect in their motives and origins the forces that have reshaped American society in the second half of the century.

Drawing on recent census data and other primary sources, Portes and Rumbaut revise our understanding of immigrant America in a sweeping and multifaceted analysis. They probe the dynamics of immigrant politics, examining questions of identity and loyalty among newcomers who are "in a society but not of it," and explore the psychological consequences of varying modes of migration and acculturation. They look at patterns of settlement in urban America, discuss the problems of English-language acquisition and bilingual education, and explain how immigrants incorporate themselves into the American economy. Portes and Rumbaut also dispel myths about that most oppressed and controversial immigrant group, the undocumented. Though much maligned in the popular imagination, these immigrants—often positively selected men and women seeking opportunities for advancement—contribute importantly to many sectors of the American economy.

In this rich new study, which will appeal as much to the general reader as to the policy maker and social scientist, Portes and Rumbaut provide a fascinating and complex portrait of America circa 1990. It is a powerful and distinguished contribution to the literature in American and immigrant studies.

From the Inside Flap: "This book presents the experience of immigration as an economic, geographic, cultural, and psychological totality. The authors are superb researchers and clear writers; the result is that the reader senses this totality in all its complexity and its pain. Because of its intellectual breadth, Immigrant America is a portrait of American life itself, its pressures and difficulties, its mosaic of repressions, as well as its possibilities, as seen through the eyes of those struggling for a place in the society."—Richard Sennett, New York University

"Immigration is clearly in the news again, reflecting renewed interest and controversy over one of the oldest themes in our nation's history. In Immigrant America, Portes and Rumbaut tell us not only how America has become a mosaic of peoples and nationalities, but what the prospects for the future are as well. They have pulled together, in a readable fashion, a vast wealth of information and knowledge on the phenomena of immigration to the United States that is understandable to the layperson and provocative to the scholar."—Jerry M. Tinker, Subcommittee on Immigration and Refugee Affairs

"A superb book. It is that rarest of combinations: a work of impeccable scholarship that is also accessible to the general reader."—Gary E. Rubin, The American Jewish Committee

"Immigrant America: A Portrait is a fascinating and compelling window to our 'permanently changing' and amazingly diverse mosaic of peoples and cultures. The drama of newcomers' personal journeys from distant homelands combined with in-depth demographic research and history presents an invaluable resource for all students of America's unique immigrant tradition. Professors Portes and Rumbaut have compiled a masterful and provocative document, challenging our ideals of justice and compassion."—Al Santoli, author of New Americans: Immigrants and Refugees in the U.S. Today

"Immigrant America provides a fascinating and comprehensive up-to-date guide for understanding recent immigration to the U.S. and persuasive evidence that through immigration the nation has done well by doing good."—Lawrence H. Fuchs, Former Executive Director of the U.S. Select Commission on Immigration and Refugee Policy

"Chock-full of invaluable data for understanding immigration and immigrants."—Julian L. Simon, The University of Maryland

Book Description University of California Press, 1990. Condition: Good. A+ Customer service! Satisfaction Guaranteed! Book is in Used-Good condition. Pages and cover are clean and intact. Used items may not include supplementary materials such as CDs or access codes. May show signs of minor shelf wear and contain limited notes and highlighting. Seller Inventory # 0520068947-2-4

Book Description University of California Press, 1992. Condition: Good. Ships from Reno, NV. Former Library book. Shows some signs of wear, and may have some markings on the inside. Seller Inventory # GRP95935355