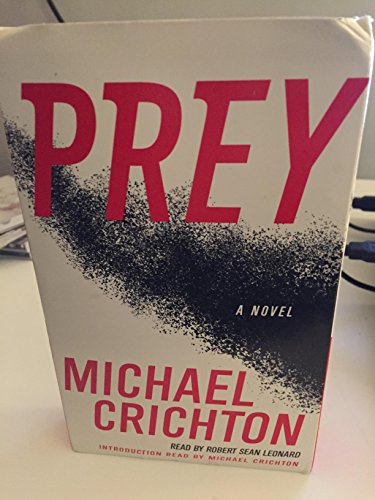 In the Nevada desert, an experiment has gone horribly wrong. A cloud of nanoparticles -- micro-robots -- has escaped from the laboratory. This cloud is self-sustaining and self-reproducing. It is intelligent and learns from experience. For all practical purposes, it is alive. It has been programmed as a predator. It is evolving swiftly, becoming more deadly with each passing hour.

Every attempt to destroy it has failed. And we are the prey.

As fresh as today's headlines, Michael Crichton's most compelling novel yet tells the story of a mechanical plague and the desperate efforts of a handful of scientists to stop it. Drawing on up-to-the-minute scientific fact, Prey takes us into the emerging realms of nanotechnology and artificial distributed intelligence-in a story of breathtaking suspense.

Prey is a novel you can't put down. Because time is running out.

Review: In Prey, bestselling author Michael Crichton introduces bad guys that are too small to be seen with the naked eye but no less deadly or intriguing than the runaway dinosaurs that made 1990's Jurassic Park such a blockbuster success.

High-tech whistle-blower Jack Forman used to specialize in programming computers to solve problems by mimicking the behavior of efficient wild animals--swarming bees or hunting hyena packs, for example. Now he's unemployed and is finally starting to enjoy his new role as stay-at-home dad. All would be domestic bliss if it were not for Jack's suspicions that his wife, who's been behaving strangely and working long hours at the top-secret research labs of Xymos Technology, is having an affair. When he's called in to help with her hush-hush project, it seems like the perfect opportunity to see what his wife's been doing, but Jack quickly finds there's a lot more going on in the lab than an illicit affair. Within hours of his arrival at the remote testing center, Jack discovers his wife's firm has created self-replicating nanotechnology--a literal swarm of microscopic machines. Originally meant to serve as a military eye in the sky, the swarm has now escaped into the environment and is seemingly intent on killing the scientists trapped in the facility. The reader realizes early, however, that Jack, his wife, and fellow scientists have more to fear from the hidden dangers within the lab than from the predators without.

The monsters may be smaller in this book, but Crichton's skill for suspense has grown, making Prey a scary read that's hard to set aside, though not without its minor flaws. The science in this novel requires more explanation than did the cloning of dinosaurs, leading to lengthy and sometimes dry academic lessons. And while the coincidence of Xymos's new technology running on the same program Jack created at his previous job keeps the plot moving, it may be more than some readers can swallow. But, thanks in part to a sobering foreword in which Crichton warns of the real dangers of technology that continues to evolve more quickly than common sense, Prey succeeds in gripping readers with a tense and frightening tale of scientific suspense. --Benjamin Reese

Book Description Harperaudio, 2002. AUDIO CASSETTE. Condition: Good. 4 RELIABLE audio cassettes withdrawn from the library collection. Some shelf wear and library markings to the box and the tapes. The audio cassettes are sturdy and presentable. Each cassette is tested, before shipping, for quality of sound. Enjoy this audio cassette performance!. Audio Book. Seller Inventory # Monarch32610146