Items related to Primitive Baptists of the Wiregrass South: 1815 to... 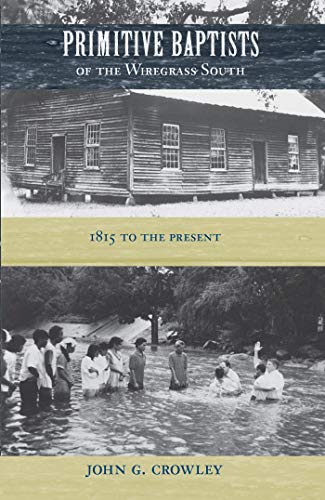 Primitive Baptists of the Wiregrass South: 1815 to the Present (University of Central Florida)

"A superb study of Primitive Baptist belief and practice in a specific region of the South. Expands our knowledge of an often neglected group."--Bill Leonard, Dean, School of Divinity, Wake Forest University

Between 1819 and 1848, Primitive Baptists emerged as a distinct, dominant religious group in the area of the deepest South known as the Wiregrass country. John Crowley, a historian and former Primitive minister, chronicles their origins and expansion into South Georgia and Florida, documenting one of the strongest aspects of the inner life of the local piney-woods culture.

Crowley begins by examining Old Baptist worship and discipline and then addressing Primitive Baptist reaction to the Civil War, Reconstruction, Populism, Progressivism, the Depression, and finally the ferment of the 1960s and present decline of the denomination. Intensely conservative, with a strong belief in predestination, Old Baptists opposed modernizing trends sweeping their denomination in the early 19th century. Crowley describes their separation from Southern Baptists and the many internal schisms on issues such as the saving role of the gospel, the Two Seed Doctrine, and absolute as opposed to limited predestination. Going beyond doctrine, he discusses contention among Old Baptists over music, divorce, membership in secret societies, sacraments administered by heretics, and rituals such as the washing of feet.

Writing with insight and sensitivity, he navigates the history of this denomination through the 20th century and the emergence of at least twenty mutually exclusive factions of Primitive Baptists in this specific region of the Deep South.

“Crowley has done a commendable job painting a sensitive portrait of Old Baptists in the Deep South.”—Florida Historical Quarterly

“A helpful portrait of a little understood group.”—Journal of Church and State

“A well-documented source for researchers interested in Baptist life in the Wiregrass region.”—North Carolina Historical Review

“Blends religious and social history to tell a story that has been neglected far too long.”—American Historical Review

“Baptists of any persuasion will be intrigued by Crowley’s chronicle of this religion and the Primitive Baptists that inhabit it.”—Faith and Mission

“A sensitive and concise study of an important tradition in American religion.”—Religious Studies Review

“A sophisticated and entertaining denominational history. By focusing on a region where these stern, uncompromising Calvinists were at least prominent enough to survive round after round of spiritual controversy, Crowley effectively illuminates the theological schisms that have continuously riven the Baptist faith.”—Southern Historian