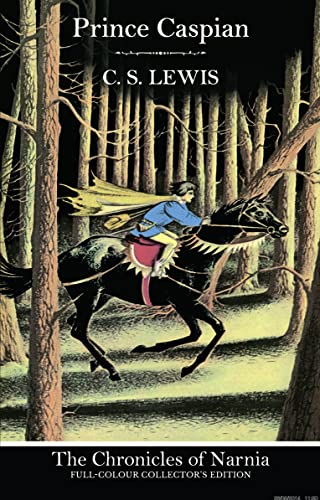 Prince Caspian (The Chronicles of Narnia)

Synopsis: Prince Caspian is in terrible danger when his wicked uncle, King Miraz, decides to get rid of the young heir to the throne. In desperation, Caspian blows the magic horn, calling on Peter, Susan, Lucy and Edmund in Narnia's hour of need.

From the Inside Flap: Narnia has been at peace since Peter, Susan, Lucy and Edmund helped rid the kingdom of the evil White Witch. But the Sons of Adam and the Daughters of Eve have returned to their own world and a dark presence now rules this once harmonious land...
Wicked King Miraz has imposed a pernicious new order of persecution and imprisonment, but the King's nephew and rightful heir, young Prince Caspian, realizing the evil of his uncle's regime, vows to revive Narnia's glorious past. Fearing for his life, he is forced to flee and calls on the four children, the magic of the mighty lion Aslan, and an army of fauns, dwarfs and woodland spirits to help him in his seemingly impossible task.
This acclaimed BBC Radio dramatization perfectly captures C.S. Lewis' magical world as Aslan and his human friends take up the challenge to win back the freedom and happiness which is the essence of Narnia.

Book Description HarperCollins Publishers. Hardcover. Condition: Good. A copy that has been read, but remains in clean condition. All pages are intact, and the cover is intact. The spine may show signs of wear. Pages can include limited notes and highlighting, and the copy can include previous owner inscriptions. The dust jacket is missing. At ThriftBooks, our motto is: Read More, Spend Less. Seller Inventory # G0007588550I3N01

Book Description HarperCollins Publishers, 2014. Condition: Good. A+ Customer service! Satisfaction Guaranteed! Book is in Used-Good condition. Pages and cover are clean and intact. Used items may not include supplementary materials such as CDs or access codes. May show signs of minor shelf wear and contain limited notes and highlighting. Seller Inventory # 0007588550-2-4

10. The Chronicles Of Narnia - Prince Caspian