Home Robert B. Parker The Professional: A Spenser Novel 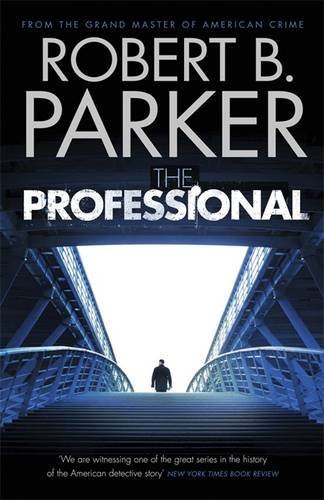 The Professional: A Spenser Novel

Synopsis: Lawyer Elizabeth Shaw hires Spenser to stop a blackmailer named Gary Eisenhower who has had several affairs with the wives of rich men.

Sue Grafton is the New York Times-bestselling author of the beloved Kinsey Millhone mystery series, which continues to delight millions of readers across the globe. Read on to see Sue Grafton's questions for Robert B. Parker, or turn the tables to see what Parker asked Grafton.


Parker: Joan is an idea person more than a writer. She has done a lot of uncredited thinking for me. But Three Weeks in Spring, about her first bout with breast cancer, was a special case. And A Year at the Races, also nonfiction, was about our initiation into the world of thoroughbred racing. I have found it wise for me to write and Joan to think (egad, what if it were the other way?), but I have also found it wise not to speak for her. I liked working with her. In fact, I like pretty much everything with her.

Grafton: I notice in your bibliography that you wrote a nonfiction book called Parker on Writing. I'd be interested in reading it, but I decided I couldn't afford the $499.99 the book is selling for online. How do you feel about a reprint? (P.S. This is not a sly hint that you should send me a copy....)

Parker: Parker on Writing is a collection of random items loosely about writing that Herb Yellin at Lord John Press collected into a finely manufactured limited edition. Herb is a friend, and given what he paid, I can convincingly say it was affection not money that captured me. I feel fine about a reprint.... If I have an extra I will send you one, but I'll have to look—it’s quite possible that I don't.

Grafton: I'm curious about your experience in writing Chasing the Bear: A Young Spenser Novel. What prompted you to write about Spenser's early life? Did you learn things about him you hadn't known before?

Parker: My publisher, agent, and wife all wanted me to try a YA novel. I did three, culminating, at my publisher's request, with Chasing the Bear. Since I knew a great deal about Spenser's adulthood, it was mostly a matter of jacking up the adulthood and sliding a consistent childhood under it. YA novels are hard because you know a great deal that you can't use.

Grafton: I saw the movie Appaloosa last night on DVD, and while I haven't had a chance to read the novel and study the two side by side, I got the impression that the movie was close to what you had in mind. Will you write about Virgil Cole and Everett Hitch again? You did seem to leave the door open to that possibility.

Parker: I’ve written two sequels to Appaloosa (Resolution and Brimstone) and am finishing up a third (Blue-Eyed Devil). Ed Harris did a wonderful job, I thought, with the movie. It is as close as it could possibly be to the book, and those parts that had to be added are hard for me to tell from my own stuff. Harris is genius, as is Viggo [Mortensen]—they nailed the characters and the relationship. You can also take Ed Harris's word—in your own adventures in Southern California you may have noticed how infrequent that is. Incidentally, Bragg's lawyer in the courtroom scene was played by the great Daniel T. Parker.

Grafton: How do you spend your time when you're not writing? Hobbies? Leisure activities? I'm not very good at having fun, but I'm hoping you are. Please advise.

Parker: My friend John Marsh once remarked, "I hate fun." I concur. Mostly, I just live my life, which turns out to be fun. I work out, box with a trainer, watch ball games, go out to dinner with Joan. You've met Joan. We’ve been married fifty-three years. Now that's fun.

1. The Professional (A Spenser Mystery)

Book Description Hardback. Condition: Very Good. The book has been read, but is in excellent condition. Pages are intact and not marred by notes or highlighting. The spine remains undamaged. Seller Inventory # GOR001799187

2. The Professional: A Spenser Novel

Book Description Quercus, 2009. Hardcover. Condition: Used; Good. **Simply Brit** Shipped with Premium postal service within 24 hours from the UK with impressive delivery time. We have dispatched from our book depository; items of good condition to over ten million satisfied customers worldwide. We are committed to providing you with reliable and efficient service at all times. Seller Inventory # mon0001698042

3. The Professional: A Spenser Novel

Book Description Quercus Publishing Plc, 2009. Hardcover. Condition: Used; Good. ex library copy, **SHIPPED FROM UK** We believe you will be completely satisfied with our quick and reliable service. All orders are dispatched as swiftly as possible! Buy with confidence!. Seller Inventory # 3296343

4. The Professional: A Spenser Novel

Book Description Quercus Publishing Plc, 2009. Hardcover. Condition: Used; Good. **SHIPPED FROM UK** We believe you will be completely satisfied with our quick and reliable service. All orders are dispatched as swiftly as possible! Buy with confidence!. Seller Inventory # mon0001630355

5. The Professional: A Spenser Novel

Book Description Quercus, 2009. Hardcover. Condition: Good. Ex-Library Book. Has usual library markings and stamps inside. All orders are dispatched the following working day from our UK warehouse. Established in 2004, we have over 500,000 books in stock. No quibble refund if not completely satisfied. Seller Inventory # mon0002007465

6. The Professional (A Spenser Mystery)

Book Description Quercus, 2009. Hardcover. Condition: Very Good. The Professional (A Spenser Mystery) This book is in very good condition and will be shipped within 24 hours of ordering. The cover may have some limited signs of wear but the pages are clean, intact and the spine remains undamaged. This book has clearly been well maintained and looked after thus far. Money back guarantee if you are not satisfied. See all our books here, order more than 1 book and get discounted shipping. . Seller Inventory # 7719-9781849160094

7. The Professional (A Spenser Mystery)

Book Description Quercus 05/11/2009, 2009. Hardcover. Condition: Very Good. Shipped within 24 hours from our UK warehouse. Clean, undamaged book with no damage to pages and minimal wear to the cover. Spine still tight, in very good condition. Remember if you are not happy, you are covered by our 100% money back guarantee. Seller Inventory # 6545-9781849160094

8. The Professional (A Spenser Mystery)

Book Description Quercus, 2009. Condition: Good. This is an ex-library book and may have the usual library/used-book markings inside.This book has hardback covers. In good all round condition. Dust Jacket in good condition. Seller Inventory # 8310103

10. The Professional: A Spenser Novel

Shipping: US$ 15.60
From United Kingdom to U.S.A.
Destination, rates & speeds