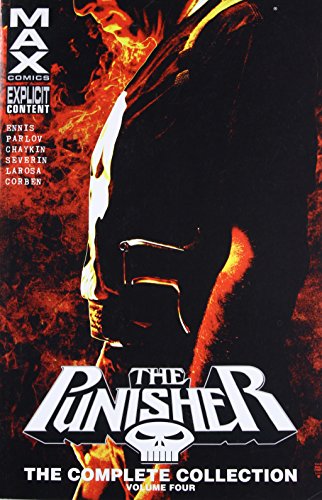 Synopsis: The Punisher's fiercest foe returns! As if a load of buckshot to the chest in shark-infested waters could put Barracuda down for good. But is even he man enough to play bodyguard to the hemophiliac son of a dangerous mob boss? If Barracuda can survive that gig, he'll be out to settle his score with Frank Castle. Meanwhile, the skull-chested vigilante hunts his biggest game of all, and makes Riker's prison his own personal playground. Plus, tales from Frank Castle's beginning and end!

About the Author: A cornerstone of the modern comic industry, Garth Ennis is most easily recognized as the creator of Preacher, one of the best-selling graphic novel series of all time. His full list of writing credits is nothing short of extraordinary; his career highlights include "Judge Dredd, Hellblazer, The Demon, Hitman, Punisher, The Pro, War Story, and The Boys". Over the past ten years, Ennis has published numerous acclaimed and fan-favorite projects through Avatar Press, including "Dicks, Chronicles Of Wormwood, 303, Streets Of Glory", and the wildly successful Crossed series. He wrote and directed his first film, "Stitched", which Avatar Press continued as an ongoing series.

Simon Spurrier, a British author of comic books and novels, first began writing professionally in 2001. He contributed extensively to the library of respected UK publisher 2000 AD, including their flagship comic book series "Judge Dredd, Harry Kipling, Lobster Random, and The Simping Detective". He also wrote several novels set in the 2000 AD and Warhammer 40,000 story continuities. With the debut of his creator-owned series "Gutsville" in 2007, Spurrier began to work in the American comic book market, predominantly on such Marvel Comics properties as "Silver Surfer, Ghost Rider, and X-Men". In 2011, Spurrier launched a successful web comic through Avatar Press, "Crossed: Wish You Were Here", which presents his take on the on the popular horror franchise (CrossedComic.com).

Howard Chaykin is a critically acclaimed American comic book writer and artist. He wrote AMERICAN FLAGG, THE SHADOW, CHALLENGERS OF THE UNKNOWN among other notable titles. He's worked with both Marvel and DC on critically acclaimed projects such as BLADE, BITE CLUB and more. Gabriel Andrade is an artist hailing from Natal, Rio Grande de Norte, Brazil. In addition DIE HARD: YEAR ONE he has also provided art for ALIENS from Dark Horse Comics.

John Powers Severin (1921 2012; Will Eisner Hall of Fame, 2003), who had a "realistic" comics style, specialized in war, western, and humor comics. One of Mad s founding artists, he worked for with Cracked magazine for forty-five years.

Book Description Marvel, 2016. Paperback. Condition: Good. Connecting readers with great books since 1972. Used books may not include companion materials, some shelf wear, may contain highlighting/notes, may not include cdrom or access codes. Customer service is our top priority!. Seller Inventory # S_278563794