Items related to Punishment and Freedom: The Rabbinic Construction of... 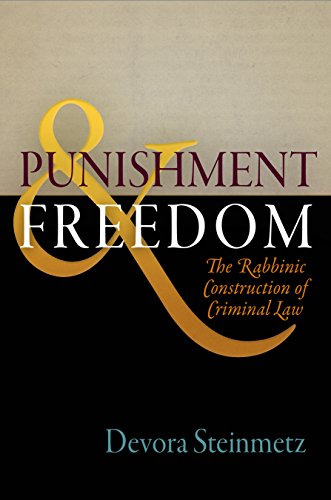 Quantity: 1
View all  copies of this book
Buy New
Price: US$ 59.17 Convert Currency
Shipping: US$ 4.00 Within U.S.A. Destination, rates & speeds
Add to basket

Title: Punishment and Freedom: The Rabbinic ...

In Punishment and Freedom, Devora Steinmetz offers a fresh look at classical rabbinic texts about criminal law from the perspective of legal and moral philosophy. Steinmetz holds that the criminal and judicial procedures they describe were never designed to be applied in a real state. Rather, these texts deal with broader philosophical, theological, and ethical conceptions of the law.

Through close readings of passages describing criminal procedure and punishment, Steinmetz argues that the Rabbis constructed an extreme positivist view of sinaitic law based in divine command. This view of law is related to a conception of the human being as fully free and responsible. Steinmetz contrasts this philosophy with the reflections on law in the Pauline letters and argues that the Rabbis see their own view of law as a key marker of Jewish identity that is tied to the rabbinic notion that human beings are charged with shaping the world and their own destiny.

Punishment and Freedom is a valuable guide through talmudic discourse for scholars of Jewish thought, early Christianity, and legal philosophy.