Items related to Pursued by Shadows 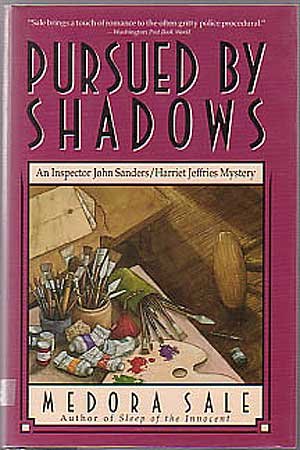 Former owners embossed library label on the half-title page, overall a very crisp and clean signed first edition, almost new and unread condition! Gift Quality! Inscribed by the author on the title page! Dj is nicely preserved in a brand new protective mylar plastic cover! 249 very fine, unmarked and uncreased suspense-filled pages! "It's a dirty, folded rectangle, about twelve inches by six inches, and it inspires greed and murder on both sides of the Atlantic. What is it? And who will die before it finds its rightful owner?" Size: 8vo - over 7ľ" - 9ľ" tall. Bookseller Inventory # 023468

When Harriet's ex-lover, Guy Beaumont, is found dead soon after he shows up on Harriet's doorstep and hands her a valuable document, Harriet and her new friend, John Sanders, must solve the crime

Characterization has the edge over plot in Arthur Ellis Award winner Sale's fourth Inspector John Sanders/Harriet Jeffries mystery (after Sleep of the Innocent ). The engaging duo find themselves enmeshed in the potentially intriguing world of international art and antiques fraud when Harriet's former lover Guy Beaumont, a renowned painter of the "corporate oil school," returns after a two-year stint in London, where he fled with Harriet's assistant, pregnant Jane Sinclair. Now Jane has left the abusive Guy and taken a supposedly priceless unidentified document--referred to, in a contrived and annoying device, only as "it" during the first half of the novel. Shortly after Guy is murdered in Harriet's apartment, paranoid sister Lesley changes places with Jane and heads to New York City with the unnamed item. Jane, meanwhile, hides out in the small town of Skaneateles, N.Y., harbored by a friendly carpenter. Before the scam unfolds, Guy's agent, the agent's two sons, a mercenary academic and various other confederates become involved. Sanders/Jeffries fans should be pleased with the developing relationship between the inspector and the photographer.
Copyright 1992 Reed Business Information, Inc.