Items related to RIDING THE SNAKE 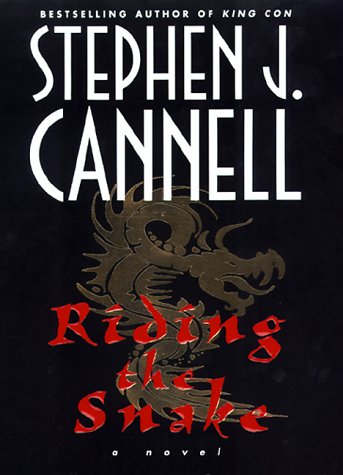 Sweeping from the exclusive golf clubs of Brentwood to the depths of Hong Kong's mysterious walled city, Riding the Snake is a thriller torn straight from the headlines. It's set in a deadly Asian underworld where terrorism, international influence peddling, and illegal immigration converge into a single sinister web with a heartless Chinese crime lord at its center.

To prankster/L.A. playboy Wheeler Cassidy, things look a little bleak. His trust land is dwindling, his good looks are dissolving into the daiquiris, and his life has no direction -- until his golden-boy younger brother, a prominent lawyer and political power broker; is found mysteriously dead. Wheeler joins forces with the beautiful Tanisha Williams, an L.A. cop from South Central who's been parked on the Asian Crimes Task Force while Internal Affairs investigates her career. Together they embark on a dangerous quest for the truth -- against deadly odds.

Tentatively at first, then with growing confidence and passion, the two follow their leads into a labyrinth of violent intrigue and a multibillion-dollar Chinese criminal conspiracy that teaches to the top of the U.S. government. Soon they find themselves up against the most ruthless Triad leader, the Washington Establishment, and violent L.A. gangsters. As Riding the Snake races to a riveting climax in the sewers beneath Los Angeles International Airport, you can almost hear it ominously ticking down -- like the suitcase nuke that's set to incinerate a big chunk of Southern California.

Stephen Cannell's extensive experience as a television writer (he's most famous for creating and scripting The Rockford Files) is readily apparent in Riding the Snake. He's done his homework, so his movement among the worlds of the aging playboy Wheeler Cassidy, the Hong Kong Triad, and the Asian Crimes Task Force of the LAPD is natural and well executed. Perhaps the most interesting aspect of Cannell's book, though, is his depiction of Tanisha Williams, a young and gifted African American detective on the LAPD. Tanisha is assigned to Asian Crimes to get her out of the way--she's refused the advances of her superior, and now she's been put under investigation. She eventually crosses paths with Cassidy who is jolted from his wastrel life of alcoholic binges and womanizing by the mysterious disappearance of his brother and the gruesome murder of his brother's secretary. Cassidy and Williams join together to investigate what appears to be a massive infiltration of the U.S. government by powerful leaders of Chinese organized crime; along the way they develop an unlikely romance. The novel blurs reality with fiction, talking about President Clinton's attempts to normalize relations with China and making connections between real campaign scandals and Cannell's fictional Chinese mobsters. While the metaphors are occasionally strained, Cannell is an old-style craftsman who knows how to tell a good story and keep his reader fully engaged until the final pages. --Patrick O'Kelley