Items related to RISING UP AND RISING DOWN: Some Thoughts on Violence,...

Home Vollmann, William T. RISING UP AND RISING DOWN: Some Thoughts on Violence, Freedom ...
Stock Image 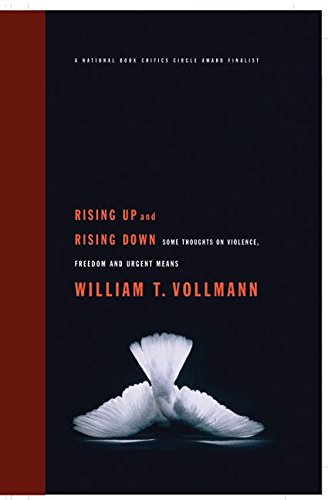 RISING UP AND RISING DOWN: Some Thoughts on Violence, Freedom and Urgent Means

As new, unread, first thus edition, first printing, as issued in pictorial boards without dust jacket. This is William T. vollman's abridgement of his 3,500 page, seven-volume magnum opus, an odyssey through the history of violence. 733 pp. *Packed carefully and shipped in a box to insure arrival in excellent confition. {Not remainder-marked} NF61. Bookseller Inventory # 022970

Title: RISING UP AND RISING DOWN: Some Thoughts on ...

An odyssey through the history of violence, Rising Up and Rising Down combines William T. Vollmann's voracious appetite for the details of history with a disregard for his own safety, examines the actions of historical figures, scrutinizes the thinking of philosophers and finds Vollmann posting personal dispatches from some of the most dangerous and war-torn places on earth. The result is his Moral Calculus, a structured decision-making system designed to help the reader decide when violence is justifiable and when it is not.

William T. Vollmann is the author of seven novels, three collections of stories, and a seven-volume critique of violence, Rising Up and Rising Down. He is also the author of Poor People, a worldwide examination of poverty through the eyes of the impoverished themselves; Riding Toward Everywhere, an examination of the train-hopping hobo lifestyle; and Imperial, a panoramic look at one of the poorest areas in America. He has won the PEN Center USA West Award for Fiction, a Shiva Naipaul Memorial Prize and a Whiting Writers' Award. His journalism and fiction have been published in The New Yorker, Esquire, Spin and Granta. Vollmann lives in Sacramento, California.