Items related to THE ROOSEVELT WOMEN 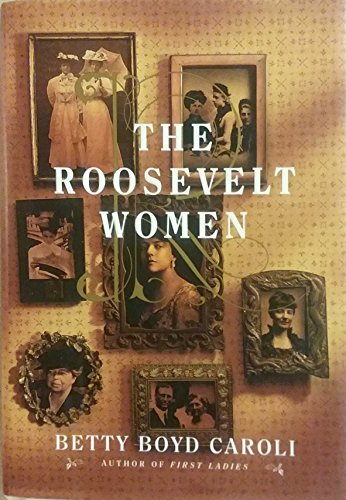 The Roosevelt name conjures up images of powerful Presidents and dashing men of high society. But few people know much about the extraordinary network of women that held the Roosevelt clan together through war, scandal, and disease. In The Roosevelt Women , Betty Boyd Caroli weaves together stories culled from a rich store of letters, memoirs, and interviews to chronicle nine extraordinary Roosevelt women across a century and a half of turbulent history.She examines the Roosevelt women as mothers, daughters, wives, and, beyond that, as world travelers, authors, campaigners, and socialites in short, as themselves. She reveals how they demonstrated the energy and intellectual curiosity that defined their famous family, as well as the roles they played in the intrigues, scandals, and accomplishments that were hallmarks of the Roosevelt clan. From the much maligned Sara Delano (who sired Franklin and by turns terrified and supported Eleanor) to Theodore's irrepressible daughter, Alice (”I can either rule the country or control Alice,” Teddy once said) to the beloved Bamie, who was the only mother Alice ever knew, and the model of everything she never was in life, to the exceptionally beautiful but ultimately overwhelmed Mittie, Theodore's mother, The Roosevelt Women is an intricate portrait of bold and talented women, a grand tale of both unbearable tragedies and triumphant achievements.

First Ladies Eleanor (Franklin's wife) and Edith (Theodore's) are both subjects of full-scale biographies, and Theodore's daughter Alice Roosevelt Longworth remains legendary for her caustic wit. In this book, historian Betty Boyd Caroli looks at seven additional powerful Roosevelt women (the family didn't seem to produce or marry any other kind) and notes some intriguing similarities despite the political differences that divided "Theodores" (stalwart Republicans like Corinne Roosevelt Robinson and her daughter, Corinne Robinson Alsop) and "Franklins" (Democrats such as Sara Delano Roosevelt, unjustly caricatured as the mother-in-law from hell). All these women descended from Martha Bulloch Roosevelt, a Georgia belle who married North and kept her Confederate sympathies quiet; they all were unusually independent and outspoken for women born in the 19th century; and several compensated for unsatisfying marriages with intense friendships. And they lived and breathed politics with a sense of noblesse oblige towards those not blessed with their wealth and privileges. Caroli's cogent group portrait restores to history neglected figures like Anna Roosevelt Cowles, whom some contemporaries felt would have made a better president than her younger brother Theodore, and puts well-known histories like Eleanor's in a revealing new context. --Wendy Smith