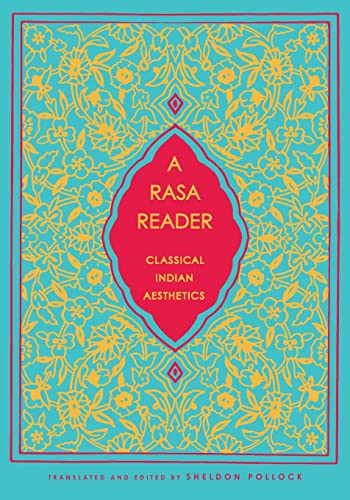 Synopsis: From the early years of the Common Era to 1700, Indian intellectuals explored with unparalleled subtlety the place of emotion in art. Their investigations led to the deconstruction of art's formal structures and broader inquiries into the pleasure of tragic tales. Rasa, or taste, was the word they chose to describe art's aesthetics, and their passionate effort to pin down these phenomena became its own remarkable act of creation.

This book is the first in any language to follow the evolution of rasa from its origins in dramaturgical thought―a concept for the stage―to its flourishing in literary thought―a concept for the page. A Rasa Reader incorporates primary texts by every significant thinker on classical Indian aesthetics, many never translated before. The arrangement of the selections captures the intellectual dynamism that has powered this debate for centuries. Headnotes explain the meaning and significance of each text, a comprehensive introduction summarizes major threads in intellectual-historical terms, and critical endnotes and an extensive bibliography add further depth to the selections. The Sanskrit theory of emotion in art is one of the most sophisticated in the ancient world, a precursor of the work being done today by critics and philosophers of aesthetics. A Rasa Reader's conceptual detail, historical precision, and clarity will appeal to any scholar interested in a full portrait of global intellectual development.

A Rasa Reader is the inaugural book in the Historical Sourcebooks in Classical Indian Thought series, edited by Sheldon Pollock. These text-based books guide readers through the most important forms of classical Indian thought, from epistemology, rhetoric, and hermeneutics to astral science, yoga, and medicine. Each volume provides fresh translations of key works, headnotes to contextualize selections, a comprehensive analysis of major lines of development within the discipline, and exegetical and text-critical endnotes, as well as a bibliography. Designed for comparativists and interested general readers, Historical Sourcebooks is also a great resource for advanced scholars seeking authoritative commentary on challenging works.

Book Description: The first intellectual history of classical Indian thought on aesthetics, with accessible translations of all the major Sanskrit thinkers.

Book Description Columbia University Press, 2018. Condition: Good. A+ Customer service! Satisfaction Guaranteed! Book is in Used-Good condition. Pages and cover are clean and intact. Used items may not include supplementary materials such as CDs or access codes. May show signs of minor shelf wear and contain limited notes and highlighting. Seller Inventory # 0231173911-2-4

Book Description Columbia University Press. PAPERBACK. Condition: Good. 0231173911 Bumped and creased book with tears to the extremities, but not affecting the text block and a remainder mark to one edge - Good. Seller Inventory # Z0231173911Z3

Shipping: US$ 19.50
From United Kingdom to U.S.A.
Destination, rates & speeds