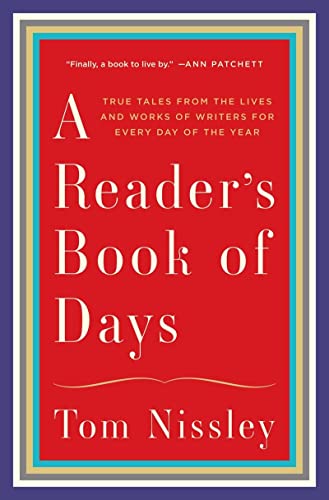 At once a love letter to literature and a charming guide to the books most worth reading, A Reader's Book of Days features bite-size accounts of events in the lives of great authors for every day of the year. Here is Marcel Proust starting In Search of Lost Time and Virginia Woolf scribbling in the margin of her own writing, "Is it nonsense, or is it brilliance?" Fictional events that take place within beloved books are also included: the birth of Harry Potter’s enemy Draco Malfoy, the blood-soaked prom in Stephen King’s Carrie.

Brimming with nearly 2,000 stories, A Reader's Book of Days will have readers of every stripe reaching for their favorite books and discovering new ones.

Author Tom Nissley on A Reader's Book of Days: True Tales from the Lives and Works of Writers

I never knew what day it was when I was writing A Reader's Book of Days. I was caught up in other days, consuming books at times as if the dates they contained were their only fruit: biographies of writers and their diaries and letters of course, but also novels, short stories, poems, and essays. I skimmed indexes, tracked through endnotes and down trails of references, and typed "january," "february," and the rest into Amazon and Google search boxes. But if I was looking for dates, what I really wanted to find were stories, ones that went beyond the usual almanac staples of births, deaths, and publication dates. April 15, after all, isn't just the day that Robinson Crusoe was published, Henry James was born, and Edward Gorey died. It's also the day that Walt Whitman mourned the death of Lincoln, Charles Dickens called the Mississippi the "beastliest river in the world," George McGovern's political director told Hunter S. Thompson he was worried about his health, and Thomas Higginson received four poems from a woman named Emily Dickinson with a note that began, "Are you too deeply occupied to say if my Verse is alive?"

As I wrote, though, I realized that A Reader's Book of Days wasn't just a book of a thousand stories. It was a book of books. I had planned from the beginning to recommend reading for each month--Suite Franç aise for June, Bleak House for November--but, especially as other people started to read it, I understood that the entire book was full of recommended reading: introducing readers to writers they might not have read, like Walter Tevis or Vera Brittain or Michael Winter, or reminding them of books they've always wanted to try, or return to, like Woolf's Orlando or Wright's Black Boy or Patricia Highsmith's The Talented Mr. Ripley.

But for me the Reader's Book didn't really become a book itself until I came across the drawings of Joanna Neborsky. As soon as I saw her "Partial Inventory of Gustave Flaubert's Personal Effects," a poster illustrating the items Flaubert left behind at his death, including the skins of a bear and a lynx, five waistcoats, thirty-five champagne glasses, and the unpublished manuscript of Bouvard and Pécuchet, I knew that she had the good humor and obsessiveness this book demanded. A Reader's Book of Days includes a hundred of her drawings, and you can see three of them below, along with the stories they accompany.

March 13, 1601 The traces left in the archives by the daily life of William Shakespeare are famously scant and, for the most part, dry and businesslike, hardly hinting at the full-bodied humanity of his plays and poems. But among the property and tax records there is one mention that, in its identity-shifting japery, seems taken directly from one of his comedies. In his gossipy diaries, London lawyer John Manningham told the story of an Elizabethan groupie who, taken by Richard Burbage's performance as Richard III, invited him home after the show. "Shakespeare, overhearing their conclusion, went before, was intertained, and at his game ere Burbidge came. Then message being brought that Richard the 3d. was at the door, Shakespeare"--answering "from the capon's blankets," as Stephen Dedalus retells the story in Ulysses--"caused returne to be made that William the Conquerour was before Rich the 3."

June 12, 1857 When no one came to shave him on his first morning as a guest at the country home of Charles Dickens, Hans Christian Andersen sent for his host's eldest son to perform the service. This may have put him on the wrong side of the Dickens children, who found his stay interminable. As Kate Dickens remembered, "He was a bony bore, and stayed on and on." Having suggested he would visit for a week or two, Andersen stayed for five, and though he entertained the children with his ingenious paper cutouts, he could tell they despised him. Their busy father was friendlier, but after Andersen finally went home to Denmark, Dickens posted a card in his guest room that read, "Hans Andersen slept in this room for five weeks--which seemed to the family AGES!"

September 26, 1929 "We very much like your title The Secret of the Old Clock," wrote L. F. Reed of Grosset & Dunlap to Edward Stratemeyer about his latest idea for a girl detective series. However, Reed didn't like most of the names Stratemeyer suggested for his teen heroine: "Stella Strong," "Nell Cody," and "Diana Dare." He preferred "Nancy Drew." Stratemeyer already had a thirty-year track record of creating series like the Rover Boys, Tom Swift, and, most recently, the Hardy Boys, so he confidently put the new sleuth in the hands of a young journalist named Mildred Wirt, and beginning with The Secret of the Old Clock, Wirt wrote nearly all of the first twenty-five Nancy Drew books published under the pen name of Carolyn Keene.