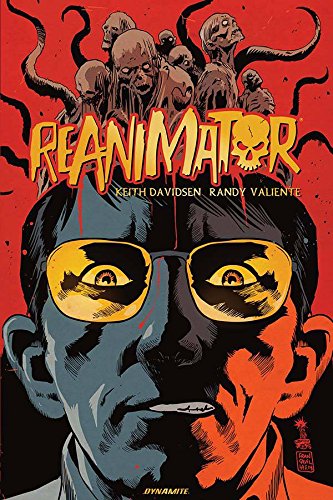 Synopsis: Dr. Herbert West, The Reanimator, returns! Setting up shop in New Orleans, the brilliant Dr. West continues his life's work: the revival of the dead by purely chemical means. To accomplish this task, he recruits Susan Greene, a young and wide-eyed pharmacologist fascinated by his macabre experiments. Initially unfazed by West's unorthodox practices (including how he funds his research - by selling zombie brain fluid as a narcotic), Susan may regret her scientific curiosity as sinister forces - those aligned with Elder Gods and Haitian Voodoo - begin to align against the Reanimator. Dynamite Entertainment proudly resurrects H.P Lovecraft's notorious mad scientist in a fear-fraught tale of Cthulhu tentacle terror and backwater Louisianan superstition!

"Reanimator is a textbook for all other would-be rebooters on how to bring franchise ideas fully back to life." - Comic Critique

"This comic's got heart even if it's in a dissecting tray... If you're a fan of scientists, magic, or eldritch abominations, you'll love this book." - Comic Monsters

"There are some decidedly treacherous undercurrents in these waters, and we're pretty much assured a bumpy, but ultimately pleasing, ride. I've seen enough already to convince me that it would be wise to stick around for the duration - and to hang on really tight." - Daily Grindhouse

"So many fantastic nods to Lovecraft... it's hard not to smile at a legend being honored." - Dread Central

"Herbert West is back and crazier than ever... The art/design is excellent, just about as Lovecraftian and gruesome as you can get. Vibrant colors enhance the grotesque imagery so that the blood seems to ooze off the page." - Killer Horrorcast from Outer Space

"After many incarnations and guest-starring roles, Herbert West finally gets the solo series he deserves." - Newsarama

"Slow-burn action mixed with speedy-paced narrative progression... You're in for a treat." - Outright Geekery

"After a long day at work, I can't think of a better way to unwind." - Paste Magazine

"This is better than any movie made... fun, frantic, intense, and with wildly imaginative creepiness." - Reading with a Flight Ring

Book Description Dynamite Entertainment, 2016. Condition: Good. A+ Customer service! Satisfaction Guaranteed! Book is in Used-Good condition. Pages and cover are clean and intact. Used items may not include supplementary materials such as CDs or access codes. May show signs of minor shelf wear and contain limited notes and highlighting. Seller Inventory # 1524100447-2-4

Shipping: US$ 9.04
From United Kingdom to U.S.A.
Destination, rates & speeds