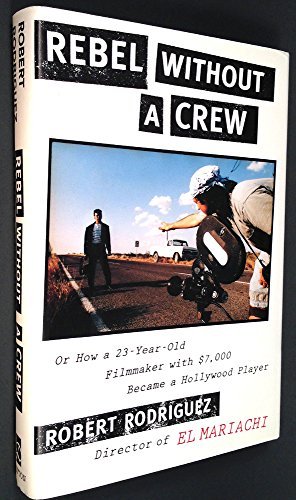 Rebel Without a Crew: Or How a 23-Year-Old Filmmaker with $7,000 Became a Hollywood Player

Synopsis: A behind-the-scenes look at the film world by the 23-year-old director of El Mariachi, a highly successful low-budget independent film, covers the making of that film and the business deals that made its success possible. 15,000 first printing. Tour.

About the Author: ROBERT RODRIGUEZ is an independent screenwriter and director of more than fifteen feature films. He pioneered the “Mariachi-style” and “one-man film crew” styles of filmmaking, and is the founder of the production company, Troublemaker Studios. Some of Rodriguez’s films include Sin City, Desperado, Once Upon a Time in Mexico, The Faculty, Sharkboy and Lavagirl, Spy Kids, Planet Terror, and Machete. He has collaborated with Quentin Tarantino on From Dusk Till Dawn and Grindhouse.

Book Description Dutton Adult, 1995. Condition: Good. A+ Customer service! Satisfaction Guaranteed! Book is in Used-Good condition. Pages and cover are clean and intact. Used items may not include supplementary materials such as CDs or access codes. May show signs of minor shelf wear and contain limited notes and highlighting. Seller Inventory # 0525937943-2-4