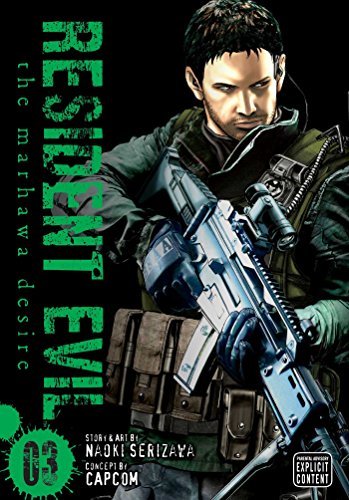 Synopsis: The highly virulent C-virus became a global disaster, but where did the outbreak start? In this prequel to the hit Resident Evil 6 game, the terrifying origins are revealed.

Missing and presumed dead in an accident three months ago, Marhawa Academy student Nanan Yoshihara has returned—horribly transformed! Ricky, shocked by the grotesque creature she has become, has no choice but to defend himself. The truth is revealed, and Ricky fights for his life, but the monsters his classmates have become may overwhelm him...

About the Author: Multi-talented Naoki Serizawa is a photographer and cinematographer as well as a manga artist and writer. His series Saru Lock was developed into a TV drama in Japan in 2009.

Book Description Paperback. Condition: Very Good. The book has been read, but is in excellent condition. Pages are intact and not marred by notes or highlighting. The spine remains undamaged. Seller Inventory # GOR007080247

Book Description VIZ Media LLC, 2015. Condition: Good. A+ Customer service! Satisfaction Guaranteed! Book is in Used-Good condition. Pages and cover are clean and intact. Used items may not include supplementary materials such as CDs or access codes. May show signs of minor shelf wear and contain limited notes and highlighting. Seller Inventory # 1421573741-2-4

Book Description VIZ Media LLC, 2015. Condition: Good. Tra. Shows some signs of wear, and may have some markings on the inside. Seller Inventory # GRP116206099