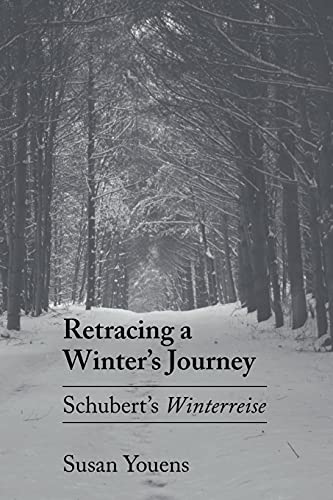 I like these songs better than all the rest, and someday you will too, Franz Schubert told the friends who were the first to hear his song cycle, Winterreise. These lieder have always found admiring audiences, but the poetry he chose to set them to has been widely regarded as weak and trivial. In Retracing a Winter's Journey, Susan Youens looks not only at Schubert's music but at the poetry, drawn from the works of Wilhelm Müller, who once wrote in his diary, "perhaps there is a kindred spirit somewhere who will hear the tunes behind the words and give them back to me!"

Youens maintains that Müller, in depicting the wanderings of the alienated lover, produced poetry that was simple but not simple-minded, poetry that embraced simplicity as part of its meaning. In her view, Müller used the ruder folk forms to give his verse greater immediacy, to convey more powerfully the wanderer's complex inner state. Youens addresses many different aspects of Winterreise: the cultural milieu to which it belonged, the genesis of both the poetry and the music, Schubert's transformation of poetic cycle into music, the philosophical dimension of the work, and its musical structure.

German lieder are among the world's most exquisite works of miniature art--one singer, one pianist, one brief poem, expressing a small but profound world in the space of a minute or two--and Franz Schubert was perhaps the greatest of all lieder composers. One of his masterworks was Die Winterreise ("The Winter Journey"), a setting of 24 poems by Wilhelm Mueller. This book may be the definitive word on that cycle. It is sure to increase the understanding of the careful reader/listener with its explanations and insights into Schubert's work.