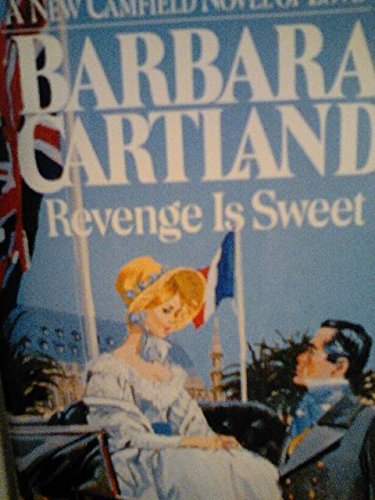 Synopsis: Valessa Chester is upset when she learns that the harmless charade in which she participated was a scorned woman's attempt to get revenge on the Marquis of Wyndonbury

About the Author: Barbara Cartland, who sadly died in May 2000 at the grand age of ninety eight, remains one of the world’s most famous romantic novelists.  With worldwide sales of over one billion, her outstanding 723 books have been translated into thirty six different languages, to be enjoyed by readers of romance globally. Writing her first book ‘Jigsaw’ at the age of 21, Barbara became an immediate bestseller.  Building upon this initial success, she wrote continuously throughout her life, producing bestsellers for an astonishing 76 years.  In addition to Barbara Cartland’s legion of fans in the UK and across Europe, her books have always been immensely popular in the USA.  In 1976 she achieved the unprecedented feat of having books at numbers 1 & 2 in the prestigious B. Dalton Bookseller bestsellers list. Although she is often referred to as the ‘Queen of Romance’, Barbara Cartland also wrote several historical biographies, six autobiographies and numerous theatrical plays as well as books on life, love, health and cookery.  Becoming one of Britain’s most popular media personalities and dressed in her trademark pink, Barbara spoke on radio and television about social and political issues, as well as making many public appearances.

Book Description Jove. Condition: Good. A copy that has been read, but remains in clean condition. All pages are intact, and the cover is intact (including dust cover, if applicable). The spine may show signs of wear. Pages can include limited notes and highlighting, and the copy can include "From the library of" labels or limited small stickers. Book may have a remainder mark or be a price cutter. Seller Inventory # B-03-05-08-0251

Book Description Penguin Publishing Group. Mass Market Paperback. Condition: Good. A copy that has been read, but remains in clean condition. All pages are intact, and the cover is intact. The spine may show signs of wear. Pages can include limited notes and highlighting, and the copy can include previous owner inscriptions. At ThriftBooks, our motto is: Read More, Spend Less. Seller Inventory # G0515098825I3N00

Book Description Penguin Publishing Group. Mass Market Paperback. Condition: Very Good. A copy that has been read, but remains in excellent condition. Pages are intact and are not marred by notes or highlighting, but may contain a neat previous owner name. The spine remains undamaged. At ThriftBooks, our motto is: Read More, Spend Less. Seller Inventory # G0515098825I4N00

Book Description Jove, 1989. Condition: Good. A+ Customer service! Satisfaction Guaranteed! Book is in Used-Good condition. Pages and cover are clean and intact. Used items may not include supplementary materials such as CDs or access codes. May show signs of minor shelf wear and contain limited notes and highlighting. Seller Inventory # 0515098825-2-4