Items related to Rhetoric for Radicals: A Handbook for Twenty-First... 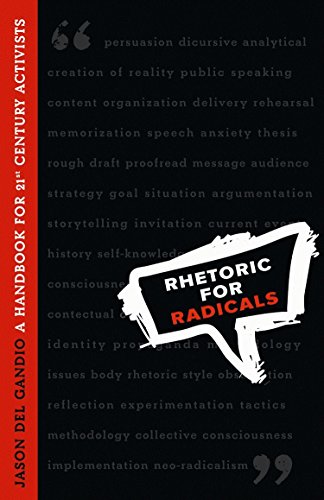 Rhetoric for Radicals: A Handbook for Twenty-First Century Activists

The cover is clean but may show some signs of wear. Some pages may have folding. Seller Inventory # 4CJKFS001TPH

Title: Rhetoric for Radicals: A Handbook for ...

Rhetoric for Radicals is intended for college-aged activists and organizers, and for the most part it's written in a relaxed, approachable style. It does get a bit cerebral and academic in places - in demonstrating how the book builds on the previous literature - but this material is kept to a minimum. On the whole, Rhetoric for Radicals is an invaluable, comprehensive how-to book that will greatly benefit beginning and seasoned rhetors alike.
Rhetoric for Radicals concludes on a hopeful note, with the wish that its activist readership will internalize the book's rhetorical tools and tactics, and will be that much better equipped to become "the rhetors of the past who created the future." And indeed, there can be but little doubt tht this thorough, well-organized, accessible - and even personal - little handbook is the best instrument imaginable for fulfilling this purpose. - Frank Kaminski, EnergyBulletin.net

Radicals have important messages to deliver, but they are often so caught up in the passion of their causes that they lose sight of effective communication—which is their most powerful tool. The ability to speak with clarity and intelligence, without underestimating the challenge of breaking new ground and winning new converts, is crucial.

Activists often suffer from a credibility gap because of their lack of a coherent message and strategic delivery. Rhetoric for Radicals addresses and helps solve these problems. It provides the tools to develop the all-important communication skills necessary to be effectively heard. If you accept that communication creates the social world, then you will agree that changing the way we communicate can change the world.

Geared to college-aged radical activists and organizers, this book will also appeal to activists of any age who want to sharpen their message.

Jason Del Gandio is a lecturer at Temple University in Philadelphia. He is a post-Seattle activist who has worked on globalization and free/fair trade issues, anti-war campaigns, and Latin American solidarity.

Jason Del Gandio is a lecturer at Temple University in Philadelphia. He is a post-Seattle activist who has worked on globalization and free/fair trade issues, anti-war campaigns and Latin American solidarity.

Goodwill Southern California - We are a 501(c)(3) nonprofit organization whose mission is to help transform lives through the power of work. Goodwill Southern California serves individuals with disabilities or other vocational disadvantages and local businesses seeking qualified employees by providing education, skills training, work experience and job placement. In addition to our retail stores located throughout Southern California and in the Inland Empire, we also provide jobs and services such as secure shredding, e-recycling (computers and electronics), packaging and assembling, post retail recycling, etc. If you would like to know more about our company, our services, partnership opportunities or to make a donation, please either visit our website goodwillsocal.org, or contact us at our toll-free number, 1 (888) 4 GOODWILL. Thank you for your support of our mission to help others.