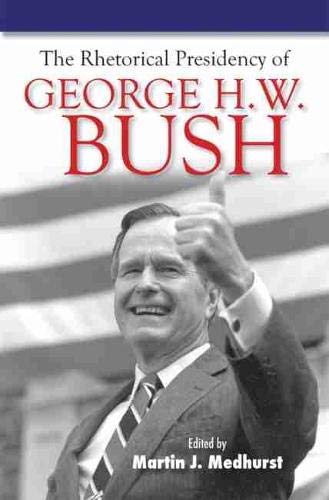 For George H. W. Bush, the distinction between campaigning (“politics”) and governing (“principles”) was crucial. Once in office, he abandoned his campaign mode and with it the rhetorical strategies that brought electoral success. Not recognizing the crucial importance of rhetoric to policy formation and implementation, Bush forfeited the resources of the bully pulpit and paid the price of electoral defeat. In this first-ever analysis of Bush’s rhetoric to draw on the archives of the Bush Presidential Library, scholars explore eight major events or topics associated with his presidency: the first Gulf War, the fall of the Berlin wall, the “New World Order,” Bush’s “education presidency,” his environmental stance, the “vision thing,” and the influence of the Religious Right. The volume concludes with a cogent of the 1992 re-election campaign and Bush’s last-gasp use of economic rhetoric.Drawing on the resources of the Bush Presidential Library and interviews with many of Bush’s White House aides, the scholars included in this tightly organized volume ask, How well did President Bush and his administration respond to events, issues, and situations? In the process, they also suggest how a more perceptive embrace of the art of rhetoric might have allowed them to respond more successfully.The Rhetorical Presidency of George H. W. Bush breaks important ground for our understanding of the forty-first president’s time in office and the reasons it ended so quickly.

MARTIN J. MEDHURST is Distinguished Professor of Rhetoric and Communication at Baylor University. Holding a Ph.D. from Pennsylvania State University, he is the founding editor of the interdisciplinary quarterly Rhetoric and Public Affairs and the author or editor of many distinguished books, including Beyond the Rhetorical Presidency, that have helped to shape the field of presidential rhetoric.