Items related to The Rhine: A Tour from Paris to Mayence by the Way...

Home Hugo, Victor The Rhine: A Tour from Paris to Mayence by the Way Aix - LA - ...
Stock Image 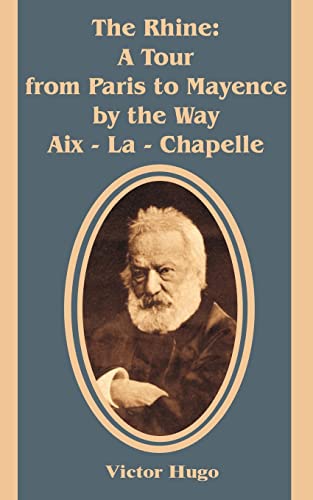 The Rhine: A Tour from Paris to Mayence by the Way Aix - LA - Chapelle with an Account of Its Legends, Antiquities, and Important Historical Events.

Some edge and corner wear, scuffed and scratched, corners are bumped and rubbed, some fraying in the top of the spine, stain in the top of the rear cover, shelf worn, overall a clean used first edition! Green cloth with black lettering and design on the front cover and gilt lettering and black design on the spine. Wonderfully well-preserved! 275 unmarked and uncreased historical pages! "Born where blooms the Alpine rose, Cradled in the Boden See----Forth the infant river flows, Leaping on in childish glee. Coming to a riper age, He crowns his rocky cup with wine, And makes a gallant pilgrimage To many a ruined tower and shrine." Size: 12mo - over 6ľ" - 7ľ" tall. Bookseller Inventory # 031881

Title: The Rhine: A Tour from Paris to Mayence by ...

Victor Hugo's travel experiences of his journey along the whole length of the Rhine, with an account of its legends, antiquities, and important historical events..

Victor Hugo (1802-1885) was a novelist, poet, and dramatist, and the most important of French Romantic writers. In his preface to his historical play Cromwell (1827) Hugo wrote that romanticism is the liberalism of literature. Hugo developed his own version of the historical novel, combining concrete, historical details with vivid, melodramatic, even feverish imagination. Among his best-known works are The Hunchback of Notre Dame and Les Misérables.

Victor Hugo was one of the greatest personalities of French literature. Though not without the faults and eccentricities which frequently characterize great geniuses, he never entered any field of literature without excelling in it. The novel, the lyric, the drama, criticism, all fell from his facile pen without apparent effort.