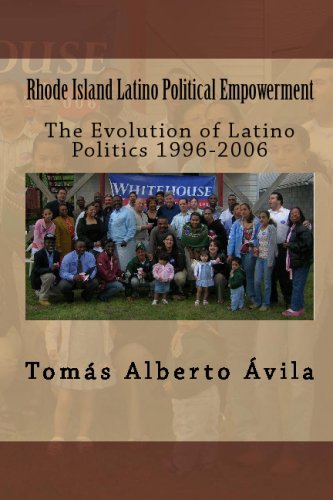 Synopsis: Rhode Island Latino Political Empowerment captures the turning point of the Rhode Island and the Nation previously dormant potential Latino politics into reality starting in 1996, when the Hispanic vote astounded political experts with both its explosive growth and its unpredictability. More than 5 million Latinos went to the polls that year, an astounding 20 percent increase over 1992. In Rhode the growing participation sprang in reaction to proposals in Congress to deny benefits to immigrants. Latinos also rallied against the Rhode Island congressional candidacy of former Providence Mayor Joseph Paolino Jr., whose campaign featured a call for English as an official national language.

About the Author: Tomás Alberto Ávila was appointed by Mayor Angel Taveras, the first Latino Mayor of Rhode Island Capital City Providence as Executive Director of the Providence Board of Elections composed of three members with the mission of protecting the integrity of the electoral process and to effectively and efficiently administer the provisions of the election laws of the United States and the State of Rhode Island including, but not limited to, the governance and conduct of elections, voter registration and any other duties prescribed by law, becoming only the second Latino appointed to such a Board; after the late Puerto Rican activist, Lydia Rivera, held it between 2003 and 2005 and the first Garifuna-American appointed to such a position in the United States.. As a political activist, strategist and consultant, he's been recognized as a political power broker and key player in the empowerment of the Latino/Hispanic community and involved in the election of many Latino elected officials throughout Rhode Island and the Northeast. He founding member of the Rhode Island Latino Political Action Committee (RILPAC), a nonpartisan organization that works "to influence the political process in the state of Rhode Island," to improve the quality of life in the Latino and urban communities. The Redistricting Coalition responsible of developing clear, legally defensible standards that were written into the enabling legislation, and developed a highly public process for the 2000 redistricting of the Rhode Island political districts. He was appointed by Secretary of State Edward Inman to serve in the Commission to Study Rhode Island Election Procedures, that successfully prepared the state of Rhode Island for the Help America Vote Act of 2002, and most recently appointed by the Speaker of the Rhode Island House of Representatives Gordon Fox to serve in the Commission to study Rhode Island Election Process, the Governors Commission on Hispanic Affairs as Policy Analyst with the responsibilities of identifying and tracking of legislative issues that impact the Latino community and was appointed to served the Mayor's City Government Equity Task Force charged to review the City's affirmative action policy, minority contracting procedures, equal opportunity compliance, and other related issues. Avila also served as executive director of Progreso Latino, in Central Falls, RI. He also served as a Policy Analyst at the Center for Hispanic Policy & Advocacy (CHisPA).

Book Description Milenio Publishing, 2007. Condition: Good. A+ Customer service! Satisfaction Guaranteed! Book is in Used-Good condition. Pages and cover are clean and intact. Used items may not include supplementary materials such as CDs or access codes. May show signs of minor shelf wear and contain limited notes and highlighting. Seller Inventory # 1928810063-2-4